I purchased your set of children’s books for my toddler as a Christmas gift. Figured I’ll get her started early in theology! They have been a delight to read to my toddler, maybe because they generate more theological discussion between her parents than what her young mind can understand! I must confess that my daughter caught me by surprise with a question while I was reading to her: “where’s Mommy Bear?” Even in her toddler logic she had a notion of what a bear couple would “normally” look like. I just said, “this family has a Papa Bear and a Mama Goose.” She seemed to accept that answer as she didn’t press the issue further (too interested in all the pumpkins illustrated on the page)! So it got me wondering, did your own kids ever ask you that question, and how did you respond? Was your choice of different animals for the family depicted in your books a simple way to get young kids to think acceptingly towards interracial marriages (which I agree should be permissible), or am I literally reading too far into this? Thanks Dr Craig!

I always have to smile when we get questions like this. I find that little children have no difficulty whatsoever in making believe that Papa Bear and Mama Goose are married and have as their children a gosling and a cub. Only adults think to raise questions about some hidden and serious meaning behind these characters.

There is an interesting backstory here, however. Red Goose and Brown Bear are Jan and I, and the children are our own! You see, shortly after we were married, Jan (who had been an elementary school teacher) recited to me something she remembered from a children’s book: “Brown Bear, Brown Bear, what do you see?” I didn’t know how to respond, so she answered, “I see a Red Goose looking at me!” (It turns out that the answer was actually supposed to be about a red bird, but never mind.) I found the little saying so endearing that I began to call her my Red Goose, and she called me her Brown Bear. As something of an amateur artist, I began to draw cartoon pictures of Red Goose and Brown Bear for every birthday, anniversary, and holiday for her. These homemade cards pictured us in very real life situations such as gardening, dining out, and studying. These cards have become even more precious memories to us than actual photographs of the same events. Naturally, when our children were born, I drew cards showing Mama Goose sitting on an egg, from which a little gosling and then a cub hatched. Thereafter, I drew Bear & Goose cards for the children’s birthdays and holidays as well. 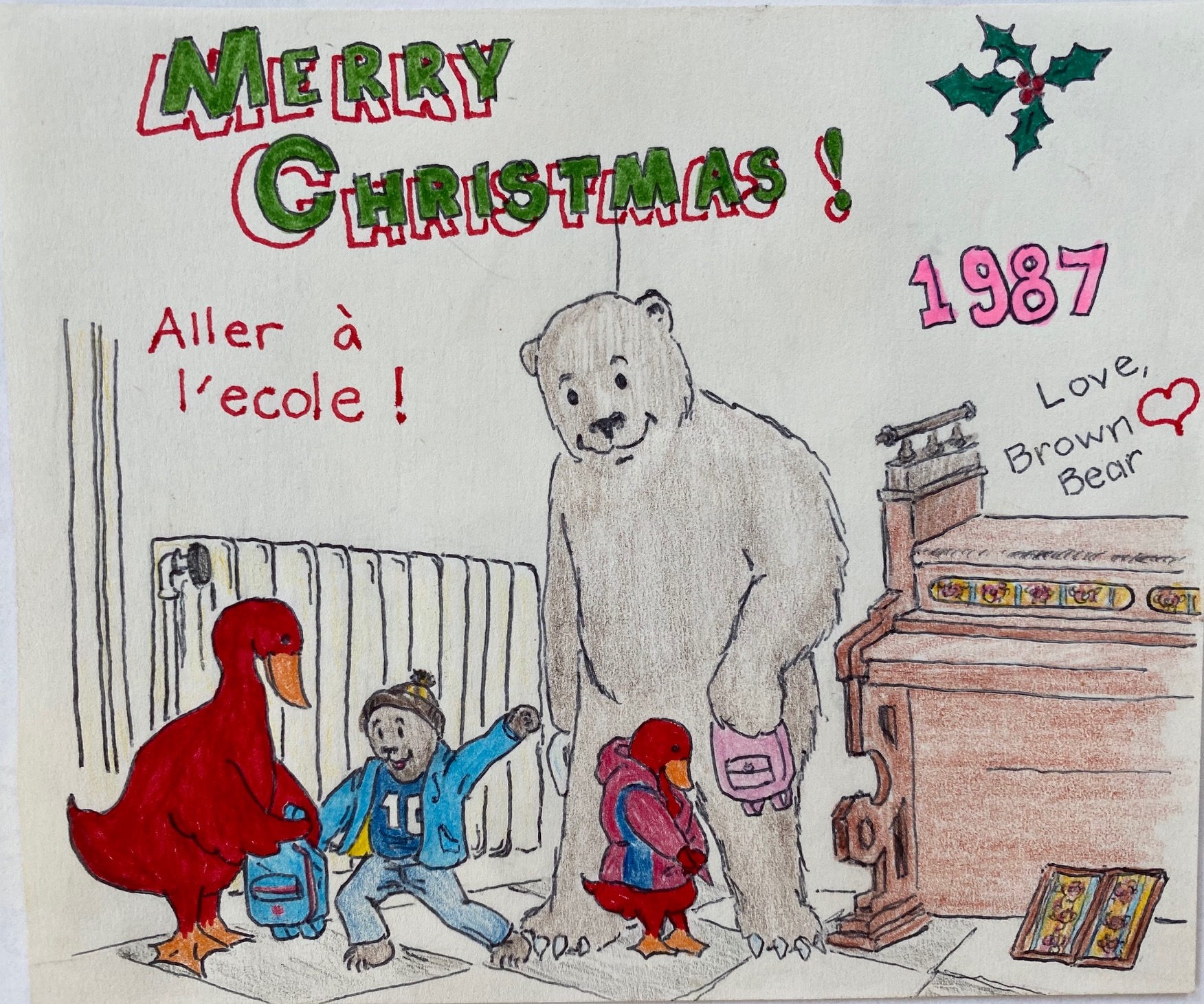 Off to school in Belgium

As the children grew older, I decided that I wanted to write a series of dialogues between them and Papa Bear on the attributes of God as part of their Christian instruction. In some other children’s books featuring cartoon bears, the father is portrayed as something of a doofus, while the mother bear is the dominant person in the family. I wanted Papa Bear by contrast to be an intelligent, accessible father to whom the children could go with their toughest questions. I wrote and shared the dialogues with our kids and then put them on the shelf.

Some years later we came up with the idea of publishing an illustrated version of these dialogues. But the time and effort that would be required to illustrate these booklets was way beyond me. So we began to look for an artist who could imitate closely my style of drawing Brown Bear and Red Goose. After several futile attempts we were approached by a pastor who told us that his 17 year old daughter Marli was an excellent illustrator and would be interested in doing the booklets. Well, we had nothing to lose, so we sent copies of some of my cards to Marli and waited for her illustrations. To our delight she was able to imitate brilliantly my artistic style, while placing the characters in completely new situations.  So we hired her to illustrate the 10 booklets on “The Attributes of God for Children.” Marli brought wonderful creativity to these booklets and improved the drawings so much by her color schemes and artistry. To add a measure of realism, she asked for photos of our furniture so that she might reproduce it in the booklets. In fact, some of the pictures on the walls in the booklets are actually copies of the cards that I made for Jan and the kids.

So there is no hidden meaning behind this unusual family. Brown Bear and Red Goose are my love gift to Jan, and we’re so delighted that children have been able to enjoy them with us and grow deeper in their understanding of God.