Dialogue With Cosmic Skeptic, Part One 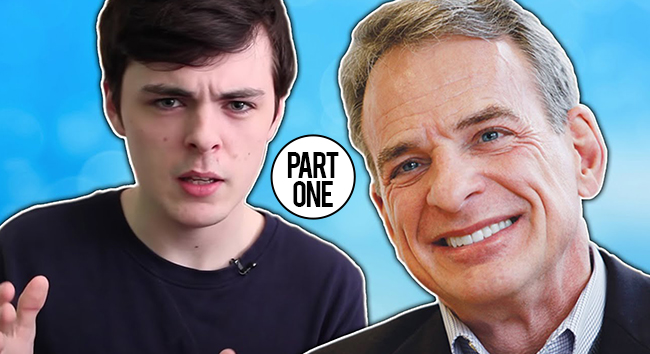 Dr. Craig is interviewed by YouTuber "Cosmic Skeptic" on the Kalam Cosmological Argument.

KEVIN HARRIS: Bill, a lot of people are talking about your interaction – your dialogue – with Cosmic Skeptic, as he is known, Alex O’Connor.[1] You were hesitant at first just because of the name to go on and do this dialogue. But you changed your mind.

DR. CRAIG: Yes, that’s right. I thought anybody who calls himself a cosmic skeptic can’t be a credible person because cosmic skepticism is so obviously self-defeating and self-referentially incoherent. Anybody who is skeptical that he knows anything contradicts himself because he claims to know that he doesn't know anything which is self-defeating. But I found in going on the show that in fact Alex was a very bright young man and very humble and open, easy to talk to, and actually not real skeptical at all but quite reasonable. So it was a very, very good experience.

KEVIN HARRIS: I'm very inspired and I'm encouraged that a young man like this has studied the issues and takes them so seriously. Of course it is his YouTube channel, but my friends and friends of Reasonable Faith who are on YouTube I can always tell when they think someone is formidable because they'll talk about them a lot, and they'll go over them and they'll dialogue and they'll respond to them, comment. I've been noticing that about Alex – that people are impressed with him and want to continue this dialogue. I found him to be humble and funny. He said he was glad he wasn't there when he was conceived with his parents.

KEVIN HARRIS: I have been laughing about that ever since. It's just hilarious. But I'm quite impressed with him. A lot of people appreciate the podcast. It was an hour and fifteen minutes and so we're not going to be able to cover it all. Let me ask you about a couple of highlights. Pretty much the first thing that he asked you was how we can know that the universe began to exist. He said that he was more interested in the philosophical reasons rather than the scientific. Now that's impressive because you are as well.

DR. CRAIG: Yes, that's right. For me the primary motivation for believing the second premise of the Kalam cosmological argument – that the universe began to exist – is philosophical. I'm persuaded that there are good reasons to think that an infinite temporal regress of events is metaphysically impossible. I thought it was remarkable that Alex led off by saying, “Well, I want to consider an objection that I think is pretty good but that you list as one of the 10 worst objections that you've ever heard to the argument – objections so bad you couldn't have made them up.” And sure enough, the objection that he wanted to talk about, wanted to press, is my favorite bad objection to the Kalam cosmological argument which is that nothing really begins to exist.

KEVIN HARRIS: There are a couple of Muslims who watched that and responded. I encourage everyone to see that because that's hilarious, too. They just break into gales of laughter because they think that your answers are so good, and they're theists. They're not going to be in Alex's corner but it was great to watch that video.

DR. CRAIG: I haven't seen that but I do know that because of my defense of the Kalam cosmological argument which comes out of this medieval Islamic tradition it has been a real bridge and point of contact in talking with Muslims like these two fellows that you mention.

KEVIN HARRIS: Again, they weren't being disrespectful to Alex; they just were so impressed with the answer that you gave a couple of times that they just break out into this spontaneous laughter. The second thing that he brought up was, “Well, wait a minute, doesn't God count as an eternity? Some of the things that you can't apply to the universe, can't you apply that to God?” And you went through qualitative rather than quantitative at that point.

DR. CRAIG: Ah, yes. Right. Even if an actually infinite number of things cannot exist we shouldn't think of the infinity of God as a composite of an infinite number of definite and discrete things that form a collection. So when we say that God is infinite it's not a mathematical quantitative concept.

KEVIN HARRIS: The next thing that he brought up, and when I saw it – heaven help me, it's one of those things that keep me up at night and I found myself thinking about it for the rest of the night – and I actually heard Alexander Pruss talking about it as well on an online video – Thompson's lamp paradox. Go over that briefly for those who are not familiar.

DR. CRAIG: All right. This was a paradox of infinity that was invented many decades ago by a fellow named Thompson. He said let's imagine that we have a lamp that has a off-on button that you press. Suppose you press it and turn it on in the first 30 seconds, and then in the next 15 seconds you press the button and it turns off. Then in the next seven and a half seconds you press it again and it turns on. Then the next three and – what? – 75/100th seconds you press the button again and that turns it the opposite. As you can see the pressings get faster and faster and faster until you have pressed the button an infinite number of times. The question Thompson asked was: When you're done will the lamp be on or off? And he argued that there's no answer to that question and that therefore the idea of doing an infinite sequence of tasks (a so-called super task) is a metaphysically impossible idea.

KEVIN HARRIS: If anything, it's a thought experiment.

DR. CRAIG: Yes, and I think that's why we don't object to it simply on physical grounds. It would be easy to show that physically no such lamp could ever exist. But, as you say, it's a thought experiment like Hilbert’s Hotel. I think that because it posits this sort of causal leap in nature it is something that is metaphysically impossible.

KEVIN HARRIS: Next thing that he talked about was the afterlife. He wanted to ask you about what it means to be in the afterlife with God. Aren't you somehow supposed to be with the infinite God, and aren't you going to be in an infinite state at that point? But I think he saw that there's a difference between the actual and the potential.

DR. CRAIG: There you go. Yes. The future – the series of events later than any point in time you pick – is always finite but always growing toward infinity as a limit which it endlessly approaches but never arrives at. It's the failure to see that difference that invalidates the objections of Wes Morriston and Alex Malpass to the Kalam cosmological argument. But Alex, I thought, seemed to see the point and was quite open to accepting it I thought.

KEVIN HARRIS: We can be very imprecise in our language technically by saying “We're going to live an eternity with God” when actually there's not going to be a day when the angels say, “Congratulations! Today you lived an eternity, and we're going to talk about it again tomorrow.”

DR. CRAIG: Right! In heaven you will always be finitely old. You will never be infinitely old. And similarly, and this is important I think, for those in hell they will never have experienced infinite punishment. The punishment that they will have endured will at every point be finite though ongoing.

KEVIN HARRIS: Next thing you brought up: issues that pertain to an undifferentiated time. Swinburne and others. He asked you about that as well because you talked about God's relationship to time, and you talked about a God sans creation. Then you seemed to camp a little bit (the two of you) on what it means if God lived in some sort of an undifferentiated time. Another thing that kind of keeps me up at night.

DR. CRAIG: This is an alternative to my own construal of divine eternity. There are quite a number of different ways of formulating the doctrine of divine eternity and God's relationship to time. One very provocative view that has been espoused by John Lucas and Richard Swinburne and Alan Padgett (all connected with Oxford University) is the doctrine that prior to the beginning of physical time (at the moment of creation) God exists in a kind of undifferentiated metaphysical time in which one cannot distinguish between hours and minutes and seconds and centuries. This is a kind of time that is a non-metric time. It doesn't have those kinds of intervals in it which could be compared with each other. And that is compatible with the Kalam cosmological argument because it would mean that there is no infinite regress of events in the life of God prior to the moment of creation even though God on this view would exist temporally prior to the moment of creation rather than timelessly.

KEVIN HARRIS: Two more things. Alex seemed to be pretty intrigued by the notion that things don't just pop into existence. That's an argument for the first premise – that we don't see a horse suddenly appear in our living rooms and things like that. In such a universe that so many non-theists tend to want and their understanding of the universe we should see that kind of a thing apparently. And the fact that we don't . . . we don't at all.

DR. CRAIG: I recently refereed an article that was submitted to journal Philosophia Christi on precisely this argument that if things can come into being without a cause like the universe then this would completely destroy modern science and lead to utter skepticism because there would be no way to rule out that the universe came into being five minutes ago with the appearance of age or that things that we're investigating, looking into, in fact just came into existence from nothing even though it looks as though they are the result of prior chronological processes. There’s no way to restrict the ability to come into being from nothing to just the universe. It could be any kind of universe that you might want to postulate that could come into being. Therefore, this would lead to a massive, well, cosmic skepticism!

KEVIN HARRIS: OK, let’s pick that up right here on the next podcast. Reasonable Faith with Dr. William Lane Craig. We’ll see you next time.[2]