Questions about Animal Death before the Fall of Man 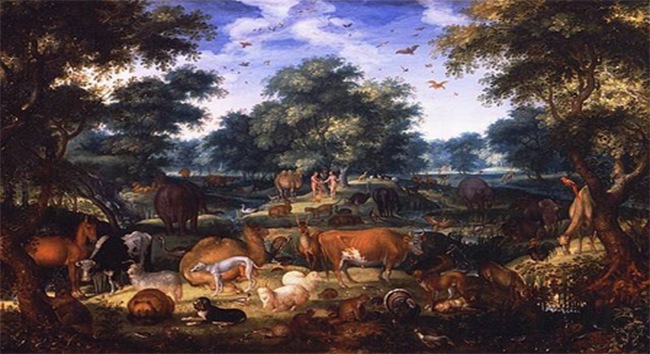 Dr. Craig hears questions about animal death before the fall of man in Genesis and views on morality which compete with theism.

Transcript Questions about Animal Death before the Fall of Man

Kevin Harris: Dr. Craig, a question from James in the UK.

Dear Dr. Craig, you've mentioned previously about how you believe that macro-evolution (i.e. primordial soup plus time equals world) as is does not clash with a biblical worldview. I was wondering, do you believe death was a reality that only became manifest post man's fall? And if so, how would evolution occur with death? I've wrestled with a few ways of approaching the point but I'm interested in how you would approach this question and which argument you would deem most reasonable.

Dr, Craig: Well, I would say in response to James that when you read the Bible, there's nothing in the Bible that suggests that animal death is the result of the fall of man. In the book of Genesis the earth was cursed to bare thorns and thistles, woman was given pain in child-bearing, but there's no suggestion in Genesis that animal death is the result of the Fall, that's simply not there. Similarly, in Romans 5, Paul is talking about how human death is the result of the Fall – because Adam fell death spread to all men, he says, because all sinned – and even there I think it's pretty clear he's talking about spiritual death, not merely organic, biological death. So I find it ironic that so many young-earth creationists should believe that animal death is the result of man's fall into sin when this isn't taught in the Bible at all. This is one of those clear cases where, I think, people are reading things into the text rather than of out of the text; they're reading in-between the lines. And scientifically speaking it would be inevitable that prior to man's fall, during those six days preceding man's fall, even taken literally micro-organisms and insects would be dying. There's no reason to think that there wasn't animal death prior to the fall of man into sin.

Kevin Harris: And there may have been thorns, but they were outside of the garden.

Dr, Craig: Well, that's a different question, too – whether or not this garden of Eden was merely a sort of oasis within a wider universe of death and chaos and so forth. William Dembski has this very interesting view that God has created a sort of fallen universe, a universe, as you say, that is riven with thorns and thistles and death and struggle, because he knew that man would freely fall into sin and therefore, being expelled from the garden, would find himself in a world that was suitable for a post-Fall condition. That's a very interesting view that presupposes that God has middle knowledge of what Adam would do, which is very ironic because Bill Dembski (for a while at least) denied the doctrine of middle knowledge. He thought God did not have middle knowledge. But I pointed out to him that his own view of the effects of the Fall presupposes that God knew what Adam would freely do in the garden and therefore prepared this world outside the garden as a sort of suitable post-Fall environment in which man would live when expelled from this oasis of order and tranquility.

Kevin Harris: Yeah, and those two examples you brought up just brought up an interesting topic, there, about the existence of thorns perhaps outside, but also the fact that Scripture says that Eve's pain in child birth was greatly increased as a result of the Fall. Since it was increased, that seems to presuppose that there, perhaps, was some discomfort.

Kevin Harris: Now, it's certainly been increased in a fallen world, for whatever reason, but animal death prior to the Fall, as Hugh Ross points out, supplied bio-deposits into the earth which man would use and eventually all these things humans used for the propagation of the Gospel.

Dr, Craig: Well, Hugh is an old-earth creationist, and so obviously if you don't take the six consecutive days literally, then obviously there's animals death prior to the fall that is important. But we're thinking here, assuming the six-day creationist view, would there be animal death prior to the Fall? And what I'm suggesting is there's nothing in the Bible that would indicate that there wasn't animal death, that this was the consequence of the Fall of man. That's simply not listed among the consequences of the Fall.[1]

Kevin Harris: This question from Peter from the USA.

Dear Dr. Craig, I've been a Christian and an atheist several times over the last few years, and I'm still searching for the truth. I respect and admire your philosophical defense of Christianity and have seen many of your debates. My question concerns the moral argument and specifically its first premise, that if God does not exist objective moral values and duties do not exist. As evidence for this premise you often cite naturalists who are moral relativists and believe that morality is just the result of evolutionary and cultural processes. However, I have not heard you tackle any of the many theories of normative ethics that moral philosophers support and discuss. These various theories account for morality in rational terms, not as arbitrary and contingent feelings that evolution and culture are responsible for. Such theories as act and rule consequentialism, Kantian deontology, contractarianism, and virtue ethics attempt to offer foundations of morality that are rational, objective, and not dependent on the existence of God. What part of these theories do you object to in order to have your first premise be true?

Dr, Craig: If I might interject at this point, since the question is getting long, let me respond to that immediately. In my debate situations one is limited to a brief sketch of the argument, and it would be impossible to survey all of the non-theistic ethical theories that one might present in order to show that objective moral values exist apart from God. So, what Peter should know is that in my debate files which I bring to the debates I have briefs prepared to present on these alternative social theories, such as contractarianism, consequentialism, virtue ethics, and I wait for my opponent to bring up his non-theistic theory of ethics before responding to it. There's no point in my wasting time attacking straw men. So I give the initial argument, I then wait for my opponent to present his non-theistic defense of objective moral values and duties, and then I will respond to it. The irony is, as Peter has undoubtedly noticed, is that my opponents almost never present such a theory. They never get up and give me a specific theory to attack. And so these theories, then, go unaddressed. But the fault lies not with me but with my opponents for not having a good alternative to theistic ethics.

Now there have been a couple of debates that I've been in where these issues have been addressed. For example, he mentions virtue ethics, and I did have a debate several years ago with a very eminent philosopher Richard Taylor on the existence of God, and Taylor is an Aristotelian with regard to ethics. He doesn't believe we have ethical duties, but he does believe that ethics or values are things that are like skills that we can do well, and the good person is someone who develops these sort of moral skills. And we had a very good debate in which I then laid out my criticisms of his non-theistic virtue ethics and tried to point out its untenability and its deficits. So that would be an example. I also had a debate a few years ago with a fellow who held to the emotivist theories of ethics and I offered a critique of his view when it was presented. So I'm happy to offer a critique of any non-theistic system when and if my opponent will present it, but until they do so this won't come up in debate situations.

I will say in general, however, the part of the theories that I will object to would be that I simply don't see any reason on a naturalistic view for the presupposition of these theories that human beings have intrinsic moral worth. Almost all of these theories begin with the assumption that human beings have intrinsic moral worth and then they will develop one's moral duties in light of that fact, but the beginning point remains unjustified. And so that's the, I think, fatal weakness in most of these views, is that they are explanatorily deficient, in that they simply begin with, unjustifiably, the assumption of the intrinsic value of human beings.

Kevin Harris: The one I hear brought up most often as an alternative is Kantian moral theory, or from Kant.

Dr, Craig: And that would be a perfect example of what I'm talking about, where he simply assumes the intrinsic value of human beings; that human beings are ends in themselves and therefore to be treated as such rather than means to an end.[2] And I just don't see any reason on a naturalistic atheist worldview to think that that Kantian assumption is true.

Kevin Harris: He brings up Christian theist Swinburne here. Richard Swinburne. He says, “In addition, some theists like Swinburne hold the position something like that morality exists with or without God but that God through his omniscience knows all of morality.”

Dr, Craig: Yes. Swinburne doesn't think that objective moral values are grounded in God in the way that I do. In fact Swinburne has a view of God that I think is very deficient – he thinks God is a contingent being. He doesn’t think that God is a metaphysically necessary being, and therefore, since many moral truths are necessary truths, they can't be grounded in God because God doesn't exist in all possible worlds for Swinburne, but these moral truths are true in all possible worlds. So for someone like Swinburne who has this, I think, deficient concept of God, grounding moral truths in God is simply out of the question. I think that many of the truths of morality are necessary truths, but since I believe that God is a metaphysically necessary being that poses no obstacle at all to grounding those truths in God.

Lest someone thinks that necessary truths can't be grounded or founded on deeper truths it's easy to give counter-examples to that. For example, I would say that the statement “states of consciousness exist” is metaphysically necessary. Why? Well, because God exists. Because God exists and is a personal being, it is metaphysically necessary that states of consciousness exist. And it would be futile to think that those two propositions are symmetrical, that the reason God exists is because states of consciousness exist. Clearly the dependence there goes the other way, there's an asymmetry, even though they're both necessary truths. Similarly, the theorems of arithmetic like 2 + 2 =4, 2 + 3 = 5, those are necessary truths, but I think they're grounded in the axioms of arithmetic. They're deduced from the so-called Peano axioms for elementary arithmetic. The axioms aren't derived from the theorems, the theorems are derived from the axioms. So the fact that a truth is necessary doesn't mean that it's ungrounded, or there's no explanation for why it's true. I think we have every reason to think that that assumption is false. There can be an asymmetry among necessary truths. And with regard to ethical theory I would ground morally necessary truths in a metaphysically necessary being like God.[3]