Media > Reasonable Faith Podcast > Questions on the Afterlife, The Atonement, and Time, Part 2

Questions on the Afterlife, The Atonement, and Time, Part 2 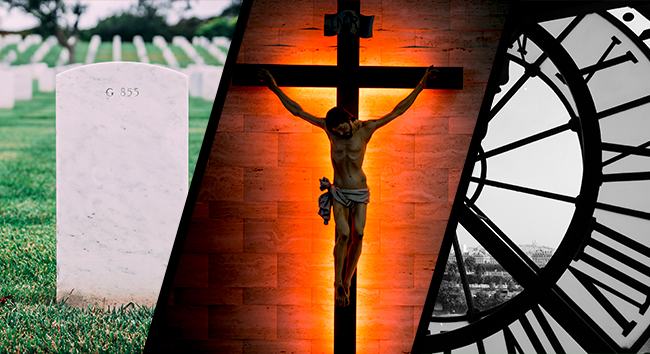 Dr. Craig offers answers to thoughtful questions he's received from around the world.

KEVIN HARRIS: Next question from Australia, Dr. Craig: “Would it be a good thing for all religions other than Christianity to disappear from the face of the Earth?”

KEVIN HARRIS: Marshall asked an interesting question. He says, “Why do we call God ‘God’ and not Yahweh? Is there a reason we've moved away from Yahweh?”

DR. CRAIG: I suppose it would be because we don't speak Hebrew, and Yahweh is a Hebrew name for God. Although even Jews would not pronounce that name. They would use a substitute like adonai or “the Lord.” Usually in the Bible it will be the word “the LORD” in English translations that is used for the name of God. And, by the way, the Greek equivalent for that is kurios which is what Jesus Christ is called – the Lord Jesus Christ. You will find in the New Testament expressions like the following from Paul – We believe in one God the Father and one Lord Jesus Christ. I think it's quite legitimate to refer to God the Father as God and Christ as Lord, but if you want to use the proper name Yahweh that's perfectly fine as well.

Hello, Dr. Craig. I have a question concerning the nature of time. Given the increasing position in current theoretical physics that time is emergent, how are we to think about the A and B theory of time?

DR. CRAIG: Let’s pause here and make sure we understand the question. The claim here that he is exploring is: is time something that just characterizes the macroscopic world as we experience it but that when you, so to speak, drill down to the subatomic world (the quantum level) does time still exist there? The suggestion is that maybe on this subatomic level there is no time, but that time is an emergent property of the universe on these macroscopic scales.

DR. CRAIG: Here I think it's important that we distinguish between what I call metaphysical time and physical time. Metaphysical time is something that is independent of physical processes. For example, if God were counting down to creation he might say, 3 . . . 2 . . . 1 . . . Let there be light! In that case you would have a sequence of mental events. You would have time existing prior to the inception of the universe. What would begin with the Big Bang would be physical time – the time that is discussed in physics. I would say that even if physical time is an emergent quality, I would tend to hold that metaphysical time is not emergent but is a fundamental property of reality that isn't dependent upon levels of existence. In addition to that, it's an open question whether even physical time is emergent. Philosophers of science like Tim Maudlin would say that time is characteristic of reality on its most fundamental levels and that it isn't emergent in any way.

However, you said that most theories of emerging time or space time from Hilbert space in the quantum gravity era do not presuppose B theory of time. So how are we to resolve this conundrum? Should we distrust the physicists and take our experience of time and temporal becoming as being a good sight to a fundamental part of reality? Or should we distrust our experience and abandon this distinction between A and B theory of time and think that time is so abstract and hard to understand that we can possibly only do it mathematically?

This is a question to Croatia.

DR. CRAIG: I think that's a false dichotomy. What we should do, I think, is to trust our experience of time and temporal becoming that we experience on our macro level and affirm that this is an objective feature of reality and therefore deny that time itself as a metaphysical reality is an emergent quality but that time is something that is fundamental to reality. So we don't need to abandon the distinction between an A and B theory of time, nor do we think that we need to distrust our experience. On the contrary, we trust our experience. I think we should hold to an A theory of time. And we should reject the view that time is merely an emergent reality. At the very most, the only thing that would be emergent would be this pseudo-quality called physical time (time as studied in physics) which could be emergent.

KEVIN HARRIS:  Next question, again from the United States:

Dear Dr. Craig, I really enjoy your ministry and it just helped me tremendously. I do have a question, and it interacts with your work on the compatibility of divine foreknowledge and human freedom. Does a Christian have to be a Calvinist or an Open Theist in order to be logically consistent? On this issue, I dialogued with an Open Theist on this issue who seemed to think so. He argued that all three views (Calvinism, Arminianism, and Molinism) were all deterministic. He said, yes, in my view all three theologies are based on determinism for what happens in human history because whatever caused God's foreknowledge to be made certain and immutable before creation is also the cause for a deterministic outworking of everything in one's immutable way after creation.

DR. CRAIG: I would completely disagree with that characterization of Arminianism and Molinism. There is nothing that causes God's foreknowledge to be made certain and immutable much less that that thing then also causes history to work out in a deterministic way. There is no such reality that has a causal impact upon God and that determines the outworking of nature. One wonders what in the world is he talking about? What sort of substance or object is this? Is it fate? That fate somehow determines God and determines the outcome of history? What is that? I think that he's entirely wrong. Arminianism and Molinism are committed to a libertarian view of freedom, and there is simply nothing that causes God's knowledge to be in any way (whether certain, immutable, or whatever).

KEVIN HARRIS: He finishes the sentence. He says:

Human will which only begins to exist after creation logically cannot be the cause of whatever made God's foreknowledge certain.

DR. CRAIG: You see, here is, again, this confusion of thinking that God's knowledge has to have a cause. That's just misconceived. There's nothing that causes God's knowledge. What I think this is is a sort of layman's version of what's called the grounding objection – that there needs to be something that grounds the truths known by God prior to his decree to create the world. But this is not a causal relationship. Grounding, or truth making, is admitted on all hands not to be causal in character. So there just is nothing that causes God's knowledge to be as it is much less that that then causes the events of history to unfold as they do.

KEVIN HARRIS: He says, “My questions are: Is Open Theism the only non-deterministic option?”

DR. CRAIG: No, there's Arminianism and Molinism, both of which affirm libertarianism.

KEVIN HARRIS: “And does whatever caused God to know the future make things deterministic?”

DR. CRAIG: No, because there's nothing that causes God to know the future much less has some mysterious determining relationship on how history unfolds.

KEVIN HARRIS: He’s getting all this from the grounding problem, you think? About God being caused . . .?

DR. CRAIG: I think it’s a muddled version of the grounding objection. But he says that he's getting this from this other chap who's been talking to him who I think just doesn't have a firm grip on the situation. To suggest that something causes God's knowledge to be a certain way and that that thing (whatever it is) then causes the events of history to occur, I have absolutely no idea what in the world he could be talking about.

KEVIN HARRIS: This next question may be the most direct question we've ever gotten: “Why do we have to do what is good?”

DR. CRAIG: This is a question I've addressed in a recent question of the week from a blogger in the UK. I would say that the insight of divine command theory of ethics is that our moral obligations arise from God's commandments. Obligations arise as a result of imperatives issued by a qualified authority. And God, as the supreme Good (the paradigm of all goodness), is eminently qualified to issue to us divine commands as to what we ought to do which in turn then become our moral duties. So we ought to do (or why do we have to do, as he puts it) what is good, or we are obligated to do what is good, because of divine commands.

KEVIN HARRIS: This is a question from Canada:

Hi, there! My name is Shane and I'm currently a teacher at a public school in northern Alberta Canada. I majored in university in Russian studies, linguistic focus, minored in philosophy, and went on to receive an MA in pre-medieval Russian literature. Of all the courses in philosophy I took, existentialism won my heart because of the literature strain and Dostoyevsky I'm thinking. My question is simply: What is Dr. Craig's opinion/attitude towards existentialist philosophy, the philosophers (theist and atheist), and in particular Soren Kierkegaard? Many thanks.

DR. CRAIG: I really resonate with his love of Dostoevsky. I love Russian literature, and Dostoevsky in particular. Dostoevsky portrays the consequences of atheism with such power in his novels like The Brothers Karamazov and Crime and Punishment that I think every Christian who has the opportunity ought to read some of Dostoevsky's work. I've also found the work of existentialist philosophers, French existentialists in particular such as Sarte and Camus, to be very helpful in understanding what I call the human predicament. That is to say, how, in the absence of God, are we to say that life is not absurd? I think that the existentialist philosophers portray in such powerful ways the absurdity of life on atheism. I've analyzed this as involving three elements: no ultimate significance, no ultimate purpose, and no ultimate value. I find tremendous help in the existentialist philosophers in understanding the predicament that ought to motivate us then to look into a religious view of reality. That's the benefit, or the genius, of Soren Kierkegaard that he mentions here. Kierkegaard didn't rest with the atheism. Kierkegaard shows how atheism leads ultimately to boredom and ennui and how attempts to live the ethical life lead to despair because one can never live up to the demands of the good. So Kierkegaard said that life’s ultimate meaning is to be found in the religious dimension. It is in the relationship to God that true human being and fulfillment is to be found. Where I differ from Kierkegaard is that he thought that the step to the religious plane had to be a leap of faith – a criterionless leap of faith – into the dark. That seems to me to be mistaken. I think that faith is reasonable. I champion a reasonable faith against Kierkegaard and say that we have good reasons for taking this step to the religious dimension of life.[1]