The End of Apologetics Part 2 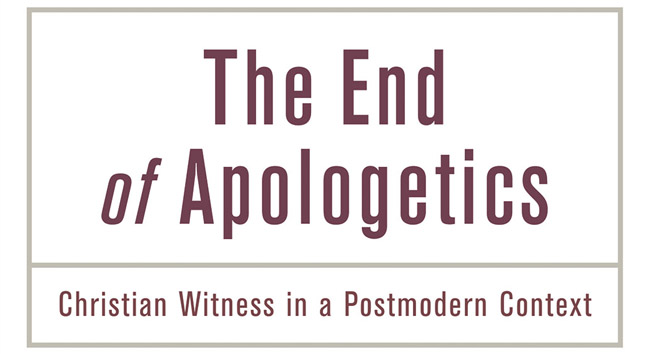 Dr. Craig continues his thoughts on a recent book that is critical of Dr. Craig's philosophy and apologetics ministry

Transcript The End of Apologetics Part 2

Kevin Harris: We are continuing a look at the book The End of Apologetics: Christian Witness in a Post-Modern Context by Myron Penner, PhD from the University of Edinburgh. Dr. Penner is an Anglican priest in the diocese of Edmonton, Alberta. For the podcast, we are playing some excerpts from an interview of Dr. Penner by Randal Rauser on his excellent blog “The Tentative Apologist.”[1] Dr. Craig, we left off with the subject of your coming to faith in Christ prior to a regime of evidence and arguments for Christianity, but then developing arguments and evidence that accompanied your relationship with Christ later. Bill, I think that is certainly legitimate. It is my story. As I grew in my faith, I learned more about the depth and grounds of my faith in Christ.

Dr. Craig: Yes, and reflection upon one's Christian experience. So it is not a matter of rationalizing or putting it into some kind of modernist grid. In fact, it was a matter of trying to understand how it was that I knew the truth of Christianity even in the absence of arguments and evidence and could hold to it even in the possible confrontation with defeaters I couldn't answer. How is it that I was able to do that? I think Plantinga has explained it beautifully and really well. This isn't to embrace, as I say, a modernist view. On the contrary, I am a pre-modernist, Kevin. If you were to classify me, I'm not post-modernist, I'm not modernist. I'm pre-modernist. This is the classic view held by the Christian church.

Randal Rauser: What do you mean by reason? What is the idea of reason that you'd subscribe to? I presume you are not advocating an irrational fideism. If you could clarify that, what do you think we should aspire to if we want to be reasonable, and how does that differ from what Craig and the Biola gang would be defending as reason?

Myron Penner: I want to begin by going back to the very first question when we talked about what I was against and how I define apologetics. Because I am not against apologetics simpliciter – I'm not against saying to someone, “Hey, Christians don't believe that. That is wrong. That would be a stupid thing to believe, and here is why what you said is wrong.” I'm not against that form of intellectual engagement with your faith. In fact, I'm all for it. In one sense, this book is (I hope) a deep intellectual engagement with faith and a reflection on faith that is critical and reasonable and all of that. I am against the discourse which bases the believability of faith, the Christian beliefs, on the basis of human reason. The way I think of human reason is rather descriptive, I guess you could call it a naturalistic view of reason. I think reason is a faculty that we have to make sense of the world. It is nothing like ultimate. It doesn't tell us even necessarily what is most important about the world, but it is something that is part of our human make up that helps us make sense of things. So that is the sense in which I guess I want to talk about reason and think it is good and it is one of the tools that we have. If we are going to talk about it in a bigger sense, what I do in the book is I position myself somewhere between what Alasdair MacIntyre would call an encyclopedic view of reason – which is the one I have been describing – which he is against as well. His view of reason, which is a traditioned inquiry form of reason . . .

Myron Penner: Sorry, yes. He kind of says you've got these two primary options and then he looks at the Nietzschian option and dismisses it as emotivism and so on. I'm trying to say that we've got something else. I draw on both Kierkegaard and St. Paul to talk about an apocalyptic view of reason which also connects to some current critical theorists. This is looking at how we make sense and determine truths in the world. So what I say is there is a kind of apocalyptic thing that happens in Paul where he is apocalypsed if I can use that language.

Randal Rauser: Can you explain what you mean?

Myron Penner: I think reason is something . . . MacIntyre is fundamentally right in one sense. Reason functions in our lives in this traditioned way – it is contextual, it is historical, it is embodied, and I think that is right. But ultimately I don't think it gives us anything like a basis that is universal. What happens in Christ changes everything.[2] So there needs to be this sense in which we have a truth intrude and erupt and become the thing that is more important than making sense of everything. In that moment then that re-contextualizes all those other reasons relative to that. I know it is a bit complicated and roundabout but that is how I think of reason.

Kevin Harris: So you have this human function of reason which is a tool that is suddenly apocalypsed or eclipsed by Christ and that changes everything.

Dr. Craig: Yeah, it is very ambiguous what he means. I think Rauser is right to keep pressing him on what he means by reason. He says it is a faculty to make sense of the world and as such is a good thing. But he is against founding the believability of faith on the basis of human reason. So I take it that he is wanting to say that the believability of Christian faith should not be based on being able to make sense out of things.

Now, how does that contradict what I said about the witness of the Holy Spirit being able to give us a knowledge of the truth of the great truths of the Gospel even if there are objections to it that we can't answer? It is not clear to me that my epistemology doesn't already provide for everything that he wants. I am not saying that in order for Christian belief to be rational you have to be able to make sense out of everything like, say, the doctrine of the Trinity or the two natures of Christ or things of that sort. I am saying there are ways to know the truth about these things even if, in your historical circumstances, you can't make sense of some of these things. But it doesn't follow from that that truth doesn't give us a universal basis. Suppose you are able to make sense out of these things? Suppose you have good arguments and evidence for these things? As long as the truth is out there then there is objectivity; there is universality of truth even if in my contextual circumstances I don't always see how to make sense out of things. So it seems to me he is confusing my personal ability to make sense of things with the objective truth of the matter itself. He thinks that if I am unable to make sense of certain things then that means that there really is no universal truth or universal objective facts about those things. He is really almost more of a rationalist than I am in that sense because I think that these facts and these truths are objective independently of my ability to make sense of them.

Kevin Harris: It is amazing to me that Paul got knocked off his horse, and that is a pretty strong encounter – it was a physical encounter with the risen Christ – but then he went on to Mars Hill, and Acts says that he reasoned in the synagogues and he reasoned in the marketplace and he did a brilliant reasoning dissertation with them on Mars Hill. He argued from creation and from the resurrection. I don't know; is he saying that what you need is just to have an encounter with Christ and then not worry about all your own reason?

Randal Rauser: Craig says that he believes justification is ultima facie for Christians with the testimony of the Holy Spirit; that there are, in his view, no evidential defeaters that could overwhelm that experience. He has actually been critiqued often as being subjectivistic on that ground, in contrast to other philosophers who would say defeaters can remove your justification for asserting to certain truth claims. Would you be sympathetic with that aspect of his view?

Myron Penner: Yes, probably. These would be sort of, I guess as a general position, I would probably want to articulate, within the paradigm that he is working within, and say he is probably right but you are going to have to do the hard work of answering objections and showing how they work.[3] It is much more like a conversation I don't see the value in having. I don't want to bail on the question, and we can talk about that, but that's specifically the paradigm I'm trying to shift away from. In the book I'm pretty explicit in the move. The subtitle of the book is Christian Witness in a Post-modern Context. I don't try and work people or move people into that context and say, hey, here is what is wrong, let's move to this. I just kind of say this is my assumption – I'm going to work in a post-modern context. Then I define what I mean by that because post-modernism can mean almost anything to anyone. What I mean in particular by post-modernity is just sort of a simple ethos where the claims of modernity are breaking down and so we feel almost in our bones that this can't work anymore, we need something different. So for me post-modernism – the context that I am trying to work within in this book – is a modernity that is aware of itself as modernity. The thing about modernity is that it positions itself as the final word or the ultimate – right? - in terms of rational foundations. Then when you become aware of yourself as that then suddenly that is relativized and you have to ask the question, “How do we work now from here?” I am shifting explicitly from what I am calling the modern epistemological framework to a hermeneutical framework which fits, of course, very well with this traditioned sense of reason.

Kevin Harris: His definition of post-modernism?

Dr. Craig: Well, I would just say that there is no reason to move to post-modernity because of the collapse of modernism. What we ought to do is go to pre-modern views such as I've tried to lay out where the witness of the Holy Spirit can be a source of warrant for the Christian faith apart from argument and evidence. I think that the pre-modern view will avoid the inherent subjectivism and relativism that attends the post-modern perspective. So there is no reason to go this post-modernist route that he wants to. I am so thankful for a interviewer like Randal Rauser who clearly understands my view and is able to press Penner on why would you disagree with this? You saw that Penner really had little of substance to say by way of disagreement with regard to the view that I defend, which allows for this sort of dual warrant through either the witness of the Holy Spirit apart from argument and evidence or through argument and evidence.[4]