Truth, Free Will, and Cosmology 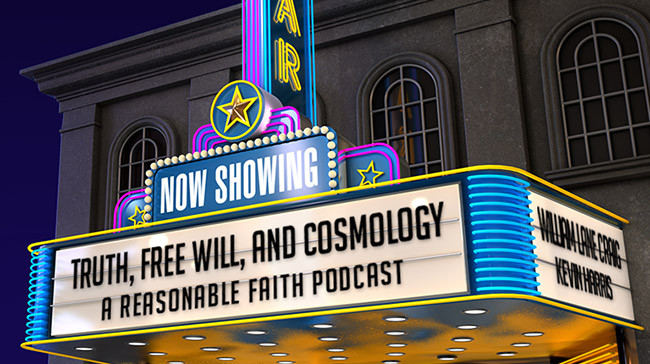 Questions to Dr. Craig on a variety of topics including the existence of truth, compatibilism and free will, and a recent cosmological theory.

Transcript Truth, Free Will, and Cosmology

Kevin Harris: Questions – powerful questions – pouring into the headquarters of Reasonable Faith day and night, and only one man can answer them. And that's . . . This movie trailer thing is not working too good [laughter] Hi, welcome to Reasonable Faith with Dr. William Lane Craig. I'm Kevin Harris in the studio with Dr. Craig, and we're going to answer some questions, Dr. Craig, put you in the hot seat a little bit, some of the questions that we've been getting. This questioner says,

Dear Dr. Craig, I've been reading books on philosophy and many philosophers ask “What is truth?” but never, at least from what I've read, do they ask “Why does truth exist?” It would be of great joy to hear what you think of that question.

So give us some joy here, Bill. [laughter]

Dr. Craig: Well, I don't think that truth is a thing, so in that sense it's a misnomer to say “why does truth exist?” if by that you mean there's some sort of a thing, an object out there, which is referred to by the word “truth” that exists. Truth would typically be taken to be a property of sentences or propositions, a property that indicates that that sentence or proposition is true as opposed to false. So truth shouldn't be thought of as a thing; at most it should be thought of as a property. And very often truth is conceived as being the property of corresponding with reality – this is called the correspondence theory of truth. A proposition which corresponds or describes reality as it is is true, and a proposition which fails to correspond to or describe reality as it is is not true, or false. So truth is simply a property of propositions or sentences indicating their correspondence or not with reality.

What deflationary theorists say is that this device of semantically ascending is merely a pragmatic tool for making what are called blind truth ascriptions. That is to say, in some cases we don't know what the proposition or sentence is so as to simply assert it, and so we have to ascend semantically and ascribe truth to propositions which we may not know. For example, suppose you say something like this: “Everything the Pope says is true.” In that case I may not know everything the Pope has said, or maybe he said so many things that it would take me too much time to simply assert those propositions. So rather than assert those propositions I ascend semantically and make a blind truth ascription by simply saying “Well, everything the Pope said is true.” And these blind truth ascriptions are useful in cases where either we're ignorant of the content of what was asserted, or where the propositions or sentences asserted are too many to assert individually, maybe they're even infinite in number, and so we can't assert them all. But for an omniscient deity there wouldn't be any need to ascend semantically – right? In a case like God, an omniscient being who has unlimited time, he could just simply assert all of the infinite propositions, or he would know them individually and he could assert them, or he would know the content of what we blindly ascribe truth to, in virtue of his omniscience.

So I think this suggests that the truth predicate is not really a substantial, significant property that is ascribed to propositions. It's merely a device of semantic assent for making blind truth ascriptions.

Now, why is this potentially useful? Well, it's useful in that it would enable us, I think, to just get rid of propositions altogether as abstract objects. You don't need to talk about whether the proposition p has the property true or false; if you think it is true you just assert the proposition p or you just deny it, if you think it's false. And it would enable you to get away from having these abstract objects like propositions. In terms of sentences you can hold that a sentence is true if and only if, and then you just assert what the sentence says. “Snow is white” is true if and only if snow is white; “I am going to the grocery store” is true if and only if I am going to the grocery store. And that's all there is to truth. Truth is just given by removing the quotation marks, so to speak, from the sentence, and asserting the content of the sentence. So I find that to be a very attractive view of truth which, I think, preserves the essence and the insight of the correspondence theory of truth – namely that a sentence s is true if and only if s – but without committing us ontologically to abstract entities like propositions.

Kevin Harris: I wonder if Plato thought that truth was some substance.

Dr. Craig: Probably; he probably thought of that as a Platonic idea that actually exists.

I'm not prepared to say it's irrational. I think, though, it's simply false – if you are determined to do what you do then you are not in any significant way genuinely free. So I would agree with the incompatibilist who thinks that freedom and determinism are not compatible with each other. It seems to me the essence of freedom lies in not being causally determined by other factors than yourself to do what you do. Once you are causally determined by factors outside yourself to do what you do then it seems to me that in no significant sense are these actions up to you. And therefore moral praise and blame, for example, would become impossible. Nor could you be held responsible for those sorts of things. So I am not persuaded that determinism is compatible with freedom. I think we should be incompatibilists; that is to say, we should either hold to libertarian freedom or we should deny that there is any freedom whatsoever.

Kevin Harris: This question comes from the UK:

Sir Roger Penrose has developed a new cosmology in his new book which describes the universe as going through an infinite number of cycles. He bases his cosmology – called conformal cyclic cosmology – on the framework of general relativity. My question is this: Does this new cosmology succeed in showing that the universe can be past eternal, at least from a physical or scientific perspective?

Dr. Craig: The model is so new that it still remains to be fully explored and assessed. But I think we can say that it does not show that the universe is past eternal. James Sinclair in our article in the Blackwell Companion to Natural Theology and then also in our more recent article on non-singular spacetimes in a volume on Science and Religion edited for McMillan by the philosopher Yujin Nagasawa argues that on Penrose's cosmology, wholly apart from its physical problems, it's not clear at all that these other cycles are chronologically prior to our Big Bang. Rather it seems that what is described here would be more like a multiverse model in which you have, so to speak, twin expanding universes coming out of a common origin point. So you do not have one universe chronologically prior to the other; rather they both share a common beginning before which there is not anything, and then you have a sort of branching or multiverse structure. So the universe on this view isn't shown to be past eternal.

Dr. Craig: Yes, that's certainly true. But on Penrose's model, since this is meant to be a model of spacetime, remember, you have to ask your question, “Well, how does this other spacetime relate to ours?” And it doesn’t have temporal priority to it. It would seem that it is related to it as another universe coming out of the same origin point.[3]