Welcome to Defenders. I’m glad that you could join us for this podcast.

In our last few sessions, we’ve been looking at the scientific evidence for the date of the origin of humanity in order to determine when, plausibly, the historical Adam might have lived. As we probed the evidence for human origins, the evidence has pointed us again and again to the progenitor of Homo sapiens and Neanderthals as the fount of humanity, the mysterious Heidelberg Man. What do we know of him?

In 1907 the lower jaw of a hominin was discovered at the Grafenrain sand and gravel quarry in Mauer, Germany, in the vicinity of Heidelberg. Dating from about 600,000 years ago, the jaw appeared to belong to a previously unknown species of early hominin. The following year the name Homo heidelbergensis was bestowed by Otto Schoetensack upon this species. In 1921 a nearly complete skull appropriate to the Mauer mandible along with a shin bone was unearthed in a metal ore mine at Broken Hill, Rhodesia. Initially classed as belonging to a new species, Homo rhodesiensis, the new find eventually came to be classified as an instance of Homo heidelbergensis. Although the brain case was relatively long and low compared to that of modern man, it was higher and more expansive than that of Homo erectus and had a capacity between 800-1300 cm3, thus overlapping the modern average, which is about 1100-1500 cm3. The man at Broken Hill is estimated to have stood about 6 feet tall and to have weighed around 160 pounds. Since the discovery at Broken Hill a number of finds have been made and have been identified as belonging to Homo heidelbergensis, including remains from Boxgrove, England; Arago, France; Bilzingsleben, Germany; Petralona, Greece; Bodo, Ethiopia; Kapthurin, Kenya, and Elandsfontein, South Africa.[1]

Ian Tattersal calls Homo heidelbergensis “a truly cosmopolitan hominid species” which may lie at the origin of the European and African lineages that eventually led to Neanderthals and Homo sapiens.[2] The origin of Heidelberg Man himself is shrouded in antiquity. He may have originated in either Asia or Europe or Africa and then migrated to the other regions. 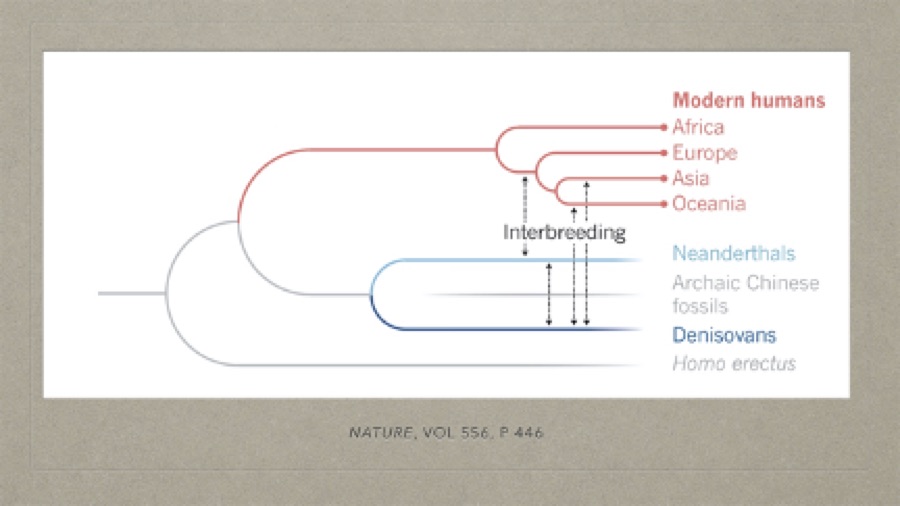 Recent protein analysis of a tooth from Gran Dolina, Spain, led the researchers to infer that the hominin in question, called Homo antecessor, “was a sister group to the group containing Homo sapiens, Neanderthals, and Denisovans,” thus implying that they all share a common ancestor.  The researchers note that this is consistent with the accepted date of the divergence of Homo sapiens and Neanderthal/Denisovan lineages between 765 and 550 thousand years ago.  The researchers did not address the identity of the last common ancestor, but if it is Heidelberg Man, as is usually thought, then Heidelberg Man could be regarded as the last common ancestor of all these species.

Homo antecessor has a remarkably-looking modern face. The positioning of Homo antecessor as one of our sister species sharing a common ancestor implies, in the words of the researchers, that a modern-like face must have a considerably deep ancestry in the genus Homo. So Adam may have looked very much like us. Here is an artist’s recreation of Heidelberg Man from the frontispiece of Stringer and Andrews’ book: 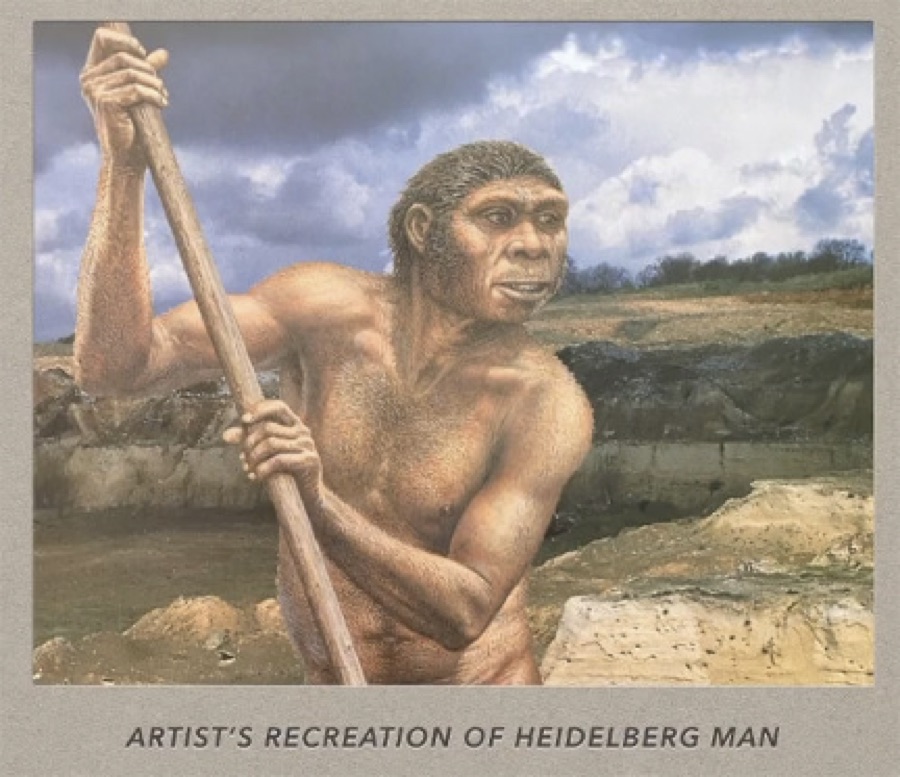 I like that the artist pictures Heidelberg Man holding a spear like those found at Schöningen, Germany. I think you’ll agree that you know people today who look rather like this. Of course, this painting is the creation of the artist’s imagination. We have no idea of Adam’s skin color, for example. Still, I think you can see that we’re not dealing here with some slumping ape-man, but rather with someone who could pass amongst us without raising too many eyebrows. Moreover, with a brain capacity of 1260 cm3, well within the modern range, Heidelberg Man is appropriate as the author of cognitively modern behaviors.

Robert Fortney sums it up beautifully,

The tendencies toward large brain size were carried further, while the social habits, tool-making, and all the paraphernalia attached to hunting and gathering tribes were added piece by piece until you can say of the creature standing before you: ecce homo [behold, the man].[3]

Adam, then, may be plausibly identified as a member of Homo heidelbergensis, living perhaps sometime earlier than 750,000 years ago. He could even have lived in the Near East in the biblical site of the Garden of Eden—though vastly earlier, of course. His descendants migrated southward into Africa, where they gave rise to Homo sapiens, and westward into Europe where they evolved into Homo antecessor, Neanderthals, and Denisovans. Eventually, these separate lines of his descendants began to interbreed, leaving their genetic signatures in our DNA.

Palaeoanthropologists debate whether modern man emerged through a gradual, multi-species development or by a sudden, mutational event occurring within a single species. Francesco D’Errico and Chris Stringer explain that,

Some authors consider that a genetic mutation in the functioning of the brain is the most probable prime mover and have argued that such a mutation, leading to a sudden diffusion of modern traits, must have occurred approximately 50 000 years ago (50 ka) among African anatomically modern humans. Others situate this neurological switch between 60 and 80 ka and associate it with cultural innovations recorded at this time in southern Africa.[4]

In contrast to this view, D’Errico and Stringer explain, partisans of what could be called the “cultural” model argue that,

the cognitive prerequisites of modern human behaviour were already largely in place among the ancestors of Neanderthals and modern humans and cite social and demographic factors. . . to explain the asynchronous emergence, disappearance and re-emergence of modern cultural traits among both African ‘modern’ and Eurasian ‘archaic’ populations.[5]

According to this scenario, “‘modernity’ and its corollary ‘cumulative culture’ is the end product of a cultural evolution within human populations that were to a large extent. . . cognitively modern.”[6]

It should be evident, I think, that these two views are not mutually exclusive. One can imagine a scenario in which a regulatory mutation, perhaps divinely caused, occurs in a member (or members) of a population belonging to Homo heidelbergensis which effects a change in the functioning of the brain that results in significantly greater cognitive capacity. Some behavioral outworkings of this increased cognitive capacity would be immediate, but others would emerge slowly over time among this person’s descendants through gene-cultural co-evolution. This is in line with the cultural model, we are to imagine both Neanderthals and Homo sapiens as heirs to the cognitive capacity for modern behaviors already present in Heidelberg Man and, in line with the first model, this increased cognitive capacity as itself the result of a crucial mutation in some ancestral individual(s) belonging to Homo heidelbergensis. These individuals could have been Adam and Eve. Their descendants multiplied and then became the human race.