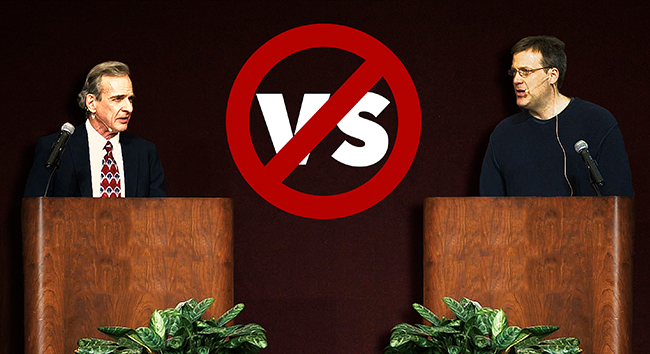 A writer for American Atheists says they should refuse to debate Theists.

As every successful movement before it, the atheist movement must now move past the debate stage because there are no new arguments to make and no new evidence to present.

We have raised awareness, we have made our arguments, we have pointed out the evidentiary and logical flaws in religious claims, we have tried to educate, and we have even gotten angry. Further debate only distracts us, helps to normalize ridiculous claims, and stokes unfounded doubts about objective reality itself.

DR. CRAIG: I think that this is probably a rationalization for the fact that they keep losing these debates. That is why they are now calling for non-participation. They refuse to engage in these debates because over and over again they’ve shown themselves incapable of refuting the arguments that theists offer for God’s existence or of offering any sort of persuasive arguments against God’s existence. So this is all too convenient, I think.

In order to break the cycle, we atheists must simply refuse to engage in nonsensical diversions, even with each other. We must reject assertions of religious belief, no matter how heartfelt, with no more compunction than we would claims of perpetual motion, psychic readings, or leprechauns. We must quite disputing creationists and no longer treat faith-healing as a mere cultural difference. Let’s forget about conducting experiments to disprove the power of prayer, and stop deliberating over the Bible’s inconsistencies as if they matter. Instead, we must quietly assert, through our refusal to engage with these ideas, that the reality-based world has moved on. This stance is already standard for any number of groups who hold bizarre beliefs. We’re not conflicted when we denounce statements of Holocaust denial. We no longer treat sincere beliefs about white supremacy as legitimate. We refuse to be open-minded about a flat Earth. We no longer debate the pros and cons of slavery or racism or women’s rights.

DR. CRAIG: I think this suggests that belief in God’s existence (theism) is on a par with belief in leprechauns, flat Earth, slavery, racism, Holocaust denial. And that is just silly. Some of the world’s greatest intellects are theists and shouldn’t be compared to people of this ilk.

Of course, we cannot eliminate delusional beliefs altogether, but we are able to marginalize them so that their influence is kept to a minimum.

KEVIN HARRIS: Or to poison the well against them, or to say, There’s nothing to see here. If you can get people to that point, as if there is nothing worth looking at.

Many people believe in ghosts, psychics, and Bigfoot, but those groups do not attempt, and are not powerful enough, to substantially influence public policy.

DR. CRAIG: I thought this was a very odd paragraph because Christians, at least in this country, are powerful enough to substantially influence public policy. So that would provide a rationale why they do need to be debated. You can’t just ignore them like the psychics, the followers of Bigfoot, or those who believe in ghosts. Those people have no influence upon public policy. But then how can you afford to simply ignore people who can substantially influence public policy? It seems to me that he is shooting himself in the foot by saying this.

There’s no Bigfoot wing of a political party fighting incessantly to include a Bigfoot curriculum in schools, or to build Bigfoot memorials on public property, or to push through legislation based on the teachings of Bigfoot, or for the government to establish a Department of Bigfoot Protection.

DR. CRAIG: Right. Exactly. That is why they can be ignored, right? You can just safely ignore these people. They are no threat to society. But on his view, Christians are a tremendous threat to society, so how can you just ignore them?

This is not to say that secular society can or should relegate religious citizens to voiceless, second-class status.

On the contrary, we must engage in social-justice debates with everyone, even though the gap between secular and religious worldviews is deep.

DR. CRAIG: Here he has contradicted himself. Didn’t we just read a moment ago, “We no longer debate the pros and cons of slavery or racism or women’s rights.” We don’t debate those things any longer. And now he says, “On the contrary, we must engage in social-justice debates with everyone” regardless of the gap between worldviews. So which is it?

At times, it seems like a bottomless chasm, but it’s not. Our common goals and needs as humans bring our two sides close enough together to form strong bridges on a wide range of issues. But we need those bridges to be built on facts, reason, and universal values. If religious citizens wish to create social policy in keeping with their faith, we must insist that they do so by sticking to objectivity and sound logic. While laudable religious beliefs do exist, they can undermine our own capacity for rational thought, which is why it’s easy to get caught up in silly debates, even with other atheists. We are activists mainly because we see powerful religious interests pushing America – perhaps unwittingly and with sincerely good intentions – toward delusional thinking and sectarian behaviors.

DR. CRAIG: Exactly. His article doesn’t make sense. He recognizes that there are these powerful religious interests that he thinks are pushing America toward delusional thinking and bad behavior, and yet he thinks we shouldn’t engage these people in debate – you just ignore them. That doesn’t make sense.

So, in order to move forward, we must participate in any reasonable, fact-based conversation while refusing to engage in arguments over fictions that have nothing to do with the real world. A pluralistic society cannot function in any other way, unless it becomes a theocracy.

This is from Tyson Gill – an American Atheist writer, a former science teacher, researcher, and software developer.

If we can be charitable, what is he trying to get at?

KEVIN HARRIS: So you marginalize.

KEVIN HARRIS: What you can marginalize, you don’t have to debate.

DR. CRAIG: Right. But the question is: are Christian theists kooks? I don’t think so. It seems to me there are good reasons to be a Christian theist, and I’ve not heard any good arguments from his side to suggest otherwise.

KEVIN HARRIS: How many podcasts have we done that talks about when you read an article from an atheist like this how often it starts out talking about God and somehow leprechauns, Bigfoot, Santa Claus, and tooth fairy shows up?

DR. CRAIG: That’s the equation in their thinking.

KEVIN HARRIS: I say let the debate continue. I agree that we should be objective, use sound logic, and look at facts and evidence.