Highlights From the Ireland Debates, Part 2 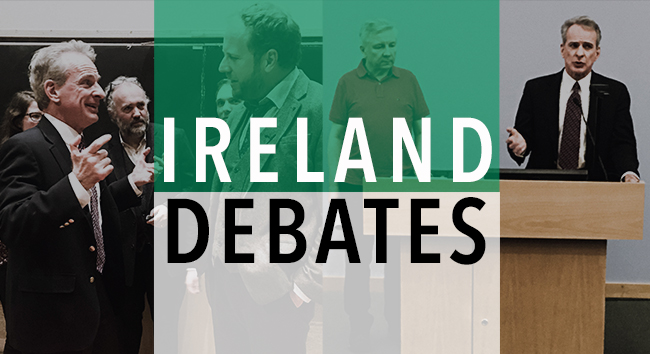 KEVIN HARRIS: We are looking at some highlights from the debates that Dr. Craig had recently in Ireland. We are going to get into these debates a little bit more with Dr. Craig on some upcoming podcasts, but today some highlights and a first rebuttal from Dr. Craig in his debate with Daniel Came.

DR. CRAIG: Dr. Came has not yet engaged any of my positive reasons to believe that God exists. I would suggest that even if his arguments succeed in showing some improbability in God's existence it is simply outweighed by the five arguments that I presented for God's existence.

But do his arguments in fact show that it is improbable that God exists? Well, as I see it, he has two basic arguments: first one from the hiddenness of God, and secondly one from the evil in the world.

With respect to divine hiddenness, I think it is important to understand that God's primary aim is to draw people into a saving love relationship with himself, not just to convince people that God exists. If that is all that God were interested in then he could certainly have made his existence more obvious. For example, he could have written “God exists” in the stars or planted a neon cross in the sky saying “Jesus saves.” But there is no guarantee at all that in such a world this sort of display would draw more people into a saving love relationship with God. In fact, it might even have the opposite effect. After a while people might begin to chafe under the brazen advertisements of their Creator and not to love him. The Bible says that God has provided sufficient evidence of his reality in nature and conscience, and by his Holy Spirit draws all persons to himself. As an omniscient being he knows what would be most effective in drawing people freely into a saving love relationship with himself. What the atheist would have to prove is that a clearer revelation of God's existence would be more effective in drawing people freely into a saving love relationship than the way that God has in fact chosen. And that is pure speculation. Thus, there is simply no basis for thinking that divine hiddenness is an argument against God's existence. I might note as well that this really isn't an argument for atheism. It is an argument for universalism. It is to say that all persons should be saved. So even if you found the argument persuasive it doesn't prove that God does not exist. It would just prove universalism is true.

What about the problem of evil? Does evil disprove God's existence? I think Dr. Came admits that the logical version of the problem of evil is a failure. The atheist cannot prove that there is a logical incompatibility between the propositions “God exists” and “Evil exists.” In order to show this he would have to demonstrate that it is necessarily true that if God is all-powerful he can create just any world that he wants and if God is all-good then he would create a world without evil. Those propositions are not necessarily true. They lay a burden of proof on the atheist which no one has been able to sustain. In fact, as long as it is even possible that God would have morally sufficient reasons for permitting the evil in the world then it is possible that God and the evil in the world coexist. For this reason the logical version of the problem of evil has been widely recognized by theists and atheists alike as bankrupt. Peter van Inwagen, a prominent Christian philosopher, says, “It used to be held that evil was incompatible with the existence of God: that no possible world contained both God and evil. So far as I am able to tell, this thesis is no longer defended.”[1]

So the question then is: does the evil in the world render God's existence improbable if not impossible? Here I will simply defend the view that Dr. Came already sketched – that given our cognitive limitations, we are simply not in a position to say with any sort of confidence when some incidence of evil occurs that God probably doesn't have a morally sufficient reason for permitting this. William Alston, in his article in Philosophical Perspectives, lists six such cognitive limitations which make it in principle impossible for us to make these kinds of probabilistic judgments.[2] He says “it is in principle impossible for us to be justified in supposing that God does not have sufficient reasons for permitting E[vil] that are unknown to us.” Take, for example, the illustration of the historical ripple effect. God's morally sufficient reason for permitting some evil to enter your life might not emerge until centuries from now, maybe in another country. When you think about the control of a provident God over the whole of human history who sees the end from the beginning you can see how hopeless it is for us finite historically limited observers to speculate upon whether or not God has a morally sufficient reason for permitting some incident of suffering to enter our lives. So Alston says,

Dr. Came has a very interesting response to this consideration in his opening speech. He points out that there are four different possibilities that an event might have through the ripple effect it sends through history. It could make the evil worse. It could be morally neutral. It could have an outweighing good. He concludes from that that therefore the probability of its having an outweighing good is only one-fourth. That's logically fallacious. That argument violates probability theory. Consider a bag of marbles and you don't know the color of the marbles in the bag. You might think, “Well, if I pick a marble from the bag there is a fifty percent chance that it is red and a fifty percent chance it is not red. So the chance of picking a red marble is fifty percent.” That is obviously fallacious because it could be blue marbles in the bag, or green marbles in the bag. You simply cannot make any sort of probability estimate based upon that kind of blind calculation. Similarly here, there is no reason to think that the probability of the outweighing good is one-fourth, or twenty-five percent. This is particularly true if the world is under the providential control of an omnipotent and loving God who orders the universe so that evils have outweighing goods. It is not a matter of random chance. The hypothesis of theism is that God is in control of human history and so orders the world so that he has morally sufficient reasons for the evils that occur.

When we see an incident of evil in our lives, we have no idea of what its impact will be upon the world. Those probabilities are simply inscrutable, and therefore you cannot say either way whether that evil has an outweighing good or makes things worse. If that is the case then the atheist's argument from evil fails because remember he has the burden of proof to show that it is improbable that God has a morally sufficient reason for permitting that evil. He has not been able to shoulder that burden of proof. He is making probability judgments that are way beyond our capacity to make with any confidence.

Finally, the third point I wanted to make in this regard is that evil actually proves God's existence. Yes, I think there is a good argument for God from evil. It goes like this:

1. If God does not exist, objective moral values do not exist.

When we consider then the good arguments that we do have for God's existence, I think it becomes quite probable that God does exist and that therefore theism remains the more plausible and probable worldview.[4]