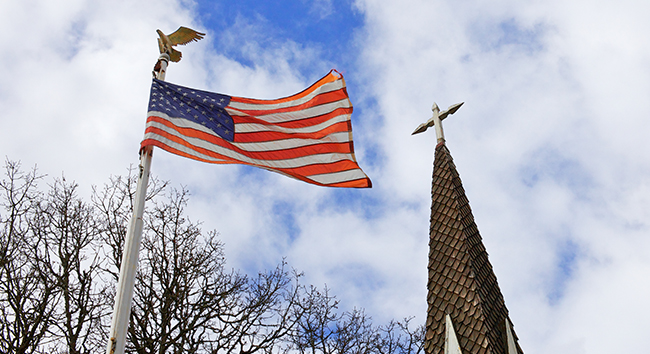 Dr. Craig is disturbed by a government report and recommendations sent to the President.

KEVIN HARRIS: Well, a lot of people are disturbed at what is in this report. Welcome to Reasonable Faith with Dr. William Lane Craig. I am Kevin Harris. Back in September 2016 (that was prior to the presidential election), the U. S. Commission on Civil Rights released its report called “Peaceful Coexistence: Reconciling Non-discrimination Principles with Civil Liberties.”[1] The report attempted to offer a detailed examination of the balance struck in the law between faith-based exemptions from otherwise applicable non-discrimination laws, and so on. The commission was chaired by Martin R. Castro, a Democrat. With many of you sending us this report, I asked Dr. Craig what his initial reactions were when he looked it over.

DR. CRAIG: My thoughts were, This is the next big case that is going to come before the Supreme Court that could further disenfranchise Christians in American culture. You would think after Roe vs. Wade destroyed the sanctity of life and Obergefell vs. Hodges destroyed the sanctity of traditional marriage, there isn't a whole lot more that the Supreme Court could do to unravel a Christian view of the world. Well, wrong! Looming on the horizon now are the dark clouds of this threat to the religious liberty that is guaranteed to us in the Bill of Rights. Up until this point most of the public controversy or conflict over the Bill of Rights has been over the so-called Establishment Clause – that Congress shall make no law that tends to the establishment of one religion. This has prevented, for example, Creationism from being taught in public schools. But the other part of the First Amendment is that Congress shall make no law that will infringe upon the free exercise of religion. In the past this has been interpreted to mean that religious organizations are exempt from certain laws in society. This is why, for example, churches don't pay property taxes. They are exempt from that. This has been used to protect the religious liberties of people because of their conscious. For example, some time ago it was ruled that the Navajo tribes have the right to use the drug peyote in their Navajo rituals even though this violates federal drug laws because in their religious ceremony religious conscience allowed them to do that and so exemptions were made due to this Free Exercise clause.

Astonishingly, the majority report from this U. S. Commission on Civil Rights is advocating ending this. They are claiming that this is a form of religious discrimination and that it removes the civil rights of other people.

Nearly 225 years after the ratification of the First Amendment to the U.S. Constitution, the cause of conscience protected by the principles of “no establishment” and “free exercise” may be losing support in the minds and hearts of the American people.

I don’t know if it is losing support in the minds and hearts of the American people, but it certainly is in the government and government officials.

DR. CRAIG: Read for us what this Martin Castro says in his majority report about religious liberty.

KEVIN HARRIS: He begins with a quote from John Adams, “The government of the United States is not, in any sense, founded on the Christian religion.”

DR. CRAIG: Which we can agree with. Separation of church and state.

KEVIN HARRIS: The fact that he starts off his comments with that probably is a pretty good indicator of what is coming. He says,

The phrases “religious liberty” and “religious freedom” will stand for nothing except hypocrisy so long as they remain code words for discrimination, intolerance, racism, sexism, homophobia, Islamophobia, Christian supremacy or any form of intolerance.

Religious liberty was never intended to give one religion dominion over other religions, or a veto power over the civil rights and civil liberties of others.[3] However, today, as in the past, religion is being used as both a weapon and a shield by those seeking to deny others equality.

DR. CRAIG: That statement in and of itself is almost self-contradictory. Religious liberties was never intended to give one religion dominion over other religions. We are not talking about giving one religion preference or dominion over others. We are talking about preserving the religious liberty of all different religious believers. This would be the right, for example, of a Muslim to wear a headcovering in the place of work should she want to. It will defend the right of Jehovah’s Witnesses not to have to work on certain days of the week. It would allow Christian churches not to hire Muslims as their youth ministers or their assistant pastor. Yet, if you apply the logic of Castro’s position, all of those would have to be abolished. If you have a Muslim come to your church wanting to be the assistant pastor, you could not use his religious beliefs as a test for his qualification for the position! You couldn’t refuse to hire a non-Christian to fill that position. Of course, the same goes for someone who is a practicing homosexual in violation to your church’s policies on the behavior of its employees. Or, again, the Sisters of the Poor – the nuns – would have to cover abortifacients in their health care policies and couldn’t be exempted because of their religious conscience. This is such a heavy-handed excuse for the imposition of government upon religious conscience and believers that I find it scandalous. In the name of civil liberties, they are denying the civil liberties of religious believers and in fact denying their constitutional right to the free exercise of their religion.

KEVIN HARRIS: It is funny that he ends that one sentence: “any form of intolerance.”

KEVIN HARRIS: Intolerance means “tolerate my view, but we don’t have to tolerate yours because you are intolerant.”

DR. CRAIG: Can you imagine if a case like this were to come before the Supreme Court and the Court were loaded with people on the left what this could do to the First Amendment rights of not just Christians but religious believers of all kinds. It just is frightening. I am really hoping that Donald Trump will fulfill his promise to appoint strict constructionists to the Supreme Court who will protect the First Amendment rights to the free exercise of religion.

KEVIN HARRIS: This has been a huge part of this past electoral campaign for president – religious liberty. Donald Trump knew that. I heard him with my own ears many times in his speeches – we will protect freedom of religion, religious liberty, in this country – because he knew there was concern.

DR. CRAIG: I think people like Mike Pence, who signed laws in Indiana protecting religious liberty, have probably got Trump’s ear in this respect. I think that is a very good thing.

DR. CRAIG: I want to quote for our listeners from the minority report of this U. S. Civil Rights Commission. I am just astonished that this would be a report by an official U. S. commission to our administration. But there was a minority report written by Peter Kirsanow. This is what he says,

My colleagues do not even pretend to neutrality and instead simply declare that they are wiser than the accumulated wisdom of millennia of the world’s major faiths.[4] It appears from the recommendations that they believe religious beliefs and practices that conflict with the sexual revolution should be cabined as much as possible. The entire point of having limited and enumerated constitutional powers and a Bill of Rights was to restrain the power of government and to protect inalienable rights regardless of changing fashions.

His final verdict on the report is:

KEVIN HARRIS: Some of this also came down to being required to sign a statement of faith. If you are a Christian or religious organization within the university campus you have your bylaws, your statement of faith, clearly marked out and in print available for anyone to read who is considering joining. Some people wanted to join some of these organizations but not adhere to the statement of faith. The majority of this report would seem to say that is wrong and you cannot hold to that.

KEVIN HARRIS: Certain activists in order to push this would try to join a campus organization and say, You cannot make your statement of faith apply to me – I don’t have to adhere to them. An activist in order to make this point but enough that we’ve got a huge report going to the President.

DR. CRAIG: I think that is right. Roe v. Wade was manufactured in that way. The original woman was put forward to bring this case. You can well imagine that there would be a case like this where some secular activist would deliberately try to apply for an open position as a pastor of a church or maybe, alternatively (to make it look less radical) apply for a position at a mosque or a synagogue. As I say, this isn’t about Christianity. This is about religious belief in general. You can well imagine this coming before the Court that this secularist or homosexual advocate is being discriminated against by the local mosque or synagogue or whatever in employment, and this violates his civil liberties.

KEVIN HARRIS: This article is really good from Charles C. Haynes in the Washington Post. He is the president of the Religious Freedom Center of the Newseum Institute. He talks about this Commission’s report. Look at what he says on the second page, second paragraph:

The title of the commission’s report alone speaks volumes: “Peaceful Coexistence: Reconciling Nondiscrimination Principles with Civil Liberties.” First, the wording suggests that religious freedom is a “civil liberty,” when in truth it is a fundamental, inalienable right protected by the First Amendment.[5] And second, the commission’s report is less about reconciling differences and more about asserting the primacy of nondiscrimination over religious freedom.

It’s time for all sides to reaffirm equality and liberty as twin pillars of the American republic. Authentic peaceful coexistence requires moving from the zero-sum game described in much of the commission’s report to the level playing field required by our constitutional commitment to both nondiscrimination and religious freedom.

Twin pillars in America – liberty and equality. Those two. You know what? I think it just takes maturity and common sense sometimes to navigate those two. What do you think?

DR. CRAIG: Well, I think the difficulty is when these two come into conflict. For example, in a religious organization, not being obliged to hire someone who holds to a religious faith that is contrary to the organization! Like InterVarsity and the example I gave. There are times when nondiscrimination and religious freedom are going to come into conflict. In that case, it is nondiscrimination that must yield because religious freedom is a constitutionally guaranteed right and Congress shall make no law which inhibits the free exercise of religion. That is what the Free Exercise clause is all about.[6]