The Latest News From Reasonable Faith 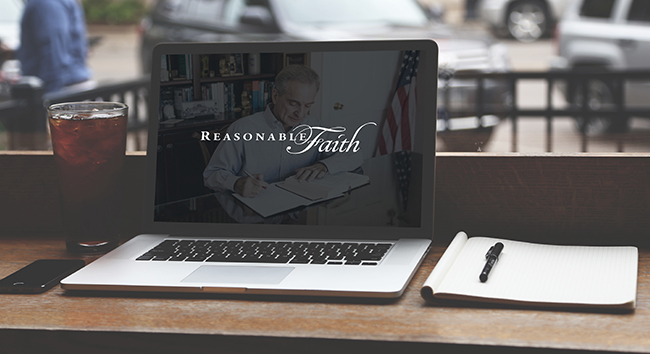 KEVIN HARRIS: Dr. Craig, from time to time we stop down and just kind of review a little bit what’s been going on and what’s coming up in the future in your work and work with Reasonable Faith. I think we can probably start with November.

DR. CRAIG: Yes. This year we met in San Diego for the annual conventions of the Evangelical Theological Philosophical Societies. Those were then followed by the American Academy of Religion and Society of Biblical Literature meetings. At the same time we had a board retreat of our Reasonable Faith Board of Directors. We also participated in the annual EPS Apologetics Conference which was held in a local church in San Diego. So it was a very full week, a very rich week. It was great for networking with other scholars – the kind of personal conversation that goes on is just as valuable as the papers that you hear. I was on a panel discussion at the EPS on the theological acceptability of theistic evolution which featured a paper by Michael Murray and John Churchill in defense of that notion, and had a good discussion. That is, I believe, on YouTube now if people want to watch it.

KEVIN HARRIS: You mentioned the board. Boy, it's important for an organization like Reasonable Faith to have a board like this of competent individuals for the accountability, for the direction.

DR. CRAIG: Yes, very much so. We have a really active and extraordinarily talented board of directors. For example, one of them is a lawyer, and his legal advice is just invaluable in terms of making contracts when I speak somewhere to protect my intellectual property rights and so forth. Others are involved in high-tech. We had a former board member who was a vice president of Comcast and very much committed to the expansion of Reasonable Faith in the area of the visual media such as YouTube. Our board has been really, really helpful in helping to direct the ministry, to support us, as well as financially in giving faithfully and generously.

KEVIN HARRIS: Before we leave November and the EPS/ETS gathering and the panel that you were on, I'm just curious: Is there a visible movement toward theistic evolution? Does it look like in the future . . .

DR. CRAIG: I do think so. This is promoted by the BioLogos Foundation that was founded by Francis Collins, and I think that it continues to gather momentum. Every year for the last three years I participated in a conference at Trinity Evangelical Divinity School on these concerns relating to creation, the origin of humanity, and things of that sort. I think that there is a profound move away from creation science and Young Earth Creationism toward views that would be more sympathetic to theistic evolution. So I do think that there is definitely a momentum in that area.

KEVIN HARRIS: We'll be talking about it some in some upcoming podcasts.

DR. CRAIG: Yes, just after the beginning of the year our board met for their semi-annual meeting. It was wonderful to receive from Michael Lepien, our executive director, some of the updates about the ministries of Reasonable Faith around the world. For example, we have two YouTube channels on which we put our videos of debates, interviews, talks, and so forth. The first of these two channels had 18.8 million minutes of viewing time this year. It was up 46%. The other YouTube channel had 13.3 million minutes viewing time. It was up 44%. So between the two of these you've got close to 30 million minutes of viewing time. Our own Reasonable Faith podcast, Kevin, that you and I do, went from 40,000 viewers in January of 2019 to a 168,000 – it quadrupled this year, by the end of the year. Our high was one month we hit 268,000 listeners that month. That was when we did the Hillsong apostasy story and the Ben Shapiro story. That month really drew a lot of viewers. Our Reasonable Faith chapters around the world are really growing. We now have 157 local Reasonable Faith chapters all around the world, and especially they're growing in Latin America. They are growing so much in Latin America that we have now hired a person who is fully engaged in supervising the Latin American chapters. He is a native Spanish-speaker and so able to do all of the application procedures and so forth, communication with the directors in their own native language rather than in English. So I'm anticipating over the next several years that we're really going to see this Latin American emphasis take off. Our heart’s desire is to be a real help to the Spanish-speaking and Portuguese-speaking churches of Latin America.

KEVIN HARRIS: We want to encourage people to be a subscriber on the YouTube channels.

KEVIN HARRIS: A lot of people who are listening right now – you subscribe to these channels. But if you haven't had a chance to do that, that would help us.

KEVIN HARRIS: So go and hit subscribe when you go to those video channels. Anything else on the board?

DR. CRAIG: Well, the other interesting thing that I did in January was I spent two weeks at Talbot, as I do every year, teaching. This time we recorded professionally the entire class. We got it all on video so that now we will be able to be used for online courses at Talbot. Apparently, the momentum in higher education these days is for online courses rather than residential. This was the last of the core courses in the philosophy MA program to be recorded and then made available on video for online classes. I was really glad to do that. It preserves this course for posterity. I completely updated it in preparing for this class so that it would be absolutely current in the issues we discussed. Then while I was out at Talbot I spent a Saturday with the folks at Reasons To Believe (Hugh Ross's ministry) which is based in Covina, California. There we had two panel discussions on the historical Adam that were extremely stimulating. The first one in the morning featured Joshua Swamidass and his proposed hypothesis for the historical Adam. We had then respondents to Josh including Andrew Loke who was Skyped in from Hong Kong and Ken Keathley from Southeastern Baptist Theological Seminary. Then in the afternoon, Fuz Rana of RTB gave a quite different proposal. Reasons To Believe is revising their theory of the historical Adam to put him earlier in time, around 150,000 years ago rather than merely 40,000 years ago. I think this is commendable. They are following the evidence where it leads rather than trying to shape the evidence to fit their theological conclusion. So they're weighing this new model. I was on a panel responding to them along with Nathan Lenz, who is a secular scientist that's interested in the dialog between science and theology and accompanied Josh Swamidass to this conference. We had a very good conversation, very charitable, open. Evangelicals are really looking for good models of how to understand the historical Adam. There is a plethora of different proposals out there. I encouraged the RTB folks to look at putting Adam even further back into the past, not a mere 150,000 but much earlier than that based upon the archaeological evidence that we have for distinctively modern human behavior that is hundreds of thousands of years old. So that was a fun time.

KEVIN HARRIS: Fascinating. We're still early in the year, Bill. Anything you're looking forward to?

DR. CRAIG: Well, I’ve got some speaking engagements coming up at different universities. I’ll be at the University of Tennessee in Knoxville and then later at the University of Missouri in Columbia. Later in the spring I’ll be in Alberta, Canada where I’ll be speaking in Calgary and Edmonton. So I’d encourage folks to have a look at the website calendar and especially if you are in Knoxville or Columbia or Alberta see if you can come to these events. I’ll also be spending a week at Houston Baptist University as is my custom teaching a one-week course there. Those are some of the things that are on the docket.

KEVIN HARRIS: We have some great podcast topics coming up, so stay close.[1]