Media > Reasonable Faith Podcast > Why Did Jesus Have to Die?

Why Did Jesus Have to Die? 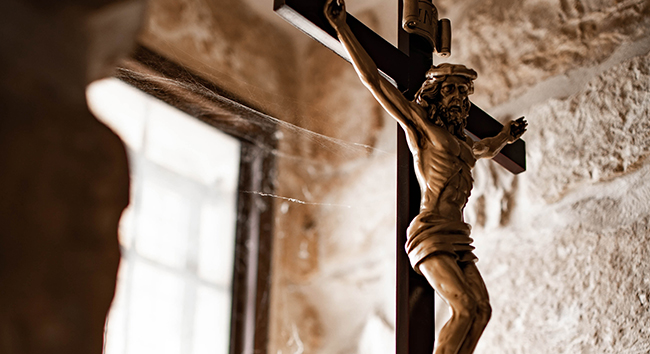 Dr. Craig is interviewed about the Atonement of Christ on the Capturing Christianity channel.

KEVIN HARRIS: Hey, there! Welcome to Reasonable Faith with Dr. William Lane Craig. I'm Kevin Harris outside tonight with the family watching the NEOWISE comet. Right now I'm under a big wide Texas sky, and we're getting a good look at the comet with a little help from a telescope and some binoculars, but, you know, it's really visible with the naked eye right now. It's beautiful. I hope you have a chance to see it before it's gone. You might want to Google some info on it. It's fascinating.

Today we want to give you a chance to hear from another video podcast from our friend Cameron Bertuzzi who produces Capturing Christianity. Cameron does a fantastic job, and has interviewed Dr. Craig a lot lately. So check out Cameron's channel on YouTube – Capturing Christianity. Here's an excerpt from a recent interview Cameron did with Dr. Craig on the atonement.[1] Again, thanks for being here, and thank you for your prayerful and financial support of Reasonable Faith. Give online anytime at ReasonableFaith.org. Here’s Cameron and Dr. Craig.

CAMERON BERTUZZI: Most lay Christians – just the nominal Christians who's attending the church – they may not even know what “atonement” means, what the word itself means. That word may just go straight over their heads. So let's talk very briefly at the outset about what atonement is. What does that word mean? Where does it come from?

DR. CRAIG: This is an essential question because the word “atonement” turns out to be very ambivalent in its meaning. If you take the word etymologically it comes from a phrase in Middle English that means “at onement” which is a state of harmony or oneness with God. So atonement in this etymological sense of the word is a state of reconciliation with God. But that's not the way the Hebrew and Greek words that are typically translated by the English word “atonement” or “to atone” are used. The way those words are used means “to cleanse” or “to purge” or “to expiate” sin or impurity. This is a completely different meaning of the word “atonement.” So when we talk about atonement, it's important to understand whether we're using the word biblically or we're using the word etymologically. This is crucial, I think, because the work of many Christian philosophers on the atonement has been about atonement in the etymological sense – of reconciliation or oneness – and it has completely ignored the biblical understanding of atonement as expiation or purging or cleansing. So it turns out that there are theories of atonement that have nothing to do with atonement in the biblical sense of the word, and therefore are not adequate theories of the atonement.

CAMERON BERTUZZI: That is so incredibly amazing. So atonement has this double meaning the way that we use it. The first way was – remind me again?

DR. CRAIG: The first way is the sense of oneness or harmony, at onement.

DR. CRAIG: Yes. Reconciliation. The closest Greek word in the New Testament for this would be katallage which is the word “reconciliation.” This certainly does stand at the heart of the Gospel message. Christ has reconciled us to God. But how has he done it? How does Jesus’ death on a Roman cross serve to reconcile the world to God? That's the question of atonement in the other sense. Jesus saw his death as an expiatory sacrifice to God akin to the animal sacrifices in the Old Testament that were offered in the tabernacle and later in the temple that served to purge the people of sin and impurity. Similarly, Jesus thought of his death as an expiatory sacrifice which cleansed the world of its sin and thereby reconciled them to God.

CAMERON BERTUZZI: You've used this word a lot – “expiation.” Would you mind explaining what that means just briefly?

DR. CRAIG: Yes. Expiation is the idea of cleansing or purging or annulling or canceling. So Jesus’ death (like the Old Testament sacrifices) served to expiate sin or impurity, that is to say, to cleanse of sin or impurity, to annul, to cancel them. This is different than the word “propitiation” or “to propitiate” which means to allay God's wrath, to satisfy God's justice. Christ's death served to do both – to expiate sin and then to propitiate God. But I was focusing here on the notion of expiation.

CAMERON BERTUZZI: OK. Now, what are the different theories of the atonement, and which one do you prefer? What are some of the issues you see with the others?

DR. CRAIG: There have been many theories of the atonement offered down through history to explain the fact that Christ died for our sins. We all agree with the fact of the atonement –  that Christ died for our sins. But these theories try to explain how it works. One model that was popular in the early centuries of church history was the so-called Christus Victor model, that is Christ the Victor. The idea here was that Christ by his incarnation, passion, and death conquered Satan and freed us – liberated us – from the bondage to death, corruption, sin, and hell. So Jesus is a sort of liberator of humanity from our bondage. Another theory is the moral influence theory – that Christ's passion and death showed us the extent to which God would go to reconcile us to himself and thereby serves to enkindle in us in turn a flame of love for God. So the moral influence of Christ's death serves to draw people to repentance and faith in Christ. That would be a second theory of the atonement – the moral influence theory. Another theory would be the so-called satisfaction theory. According to this model we have besmirched God's honor by sin and thereby we owe God an infinite debt of compensation for having wronged him which we are incapable of paying. Therefore Christ became a man and, since he was sinless, he had no debt of his own to pay but by the offering of his life to God it is a kind of infinite compensatory gift that he gives to God on our behalf and thereby pays our debt that we owe. Then the model that the Protestant Reformers offered was called penal substitution. This model differs from the others in that it says that we were guilty before God for our sins and therefore deserving of punishment and none of us could therefore be forgiven and pardoned by God without that punishment being satisfied. So Christ took on human nature and, again because he was sinless, he could offer to take that punishment upon himself in our place. So Christ paid the penalty for the sins of the human race thereby enabling God to offer us a free pardon of our sins and reconciliation to God. Now, I personally think that a full-orbed theory of the atonement is like a precious jewel that is multi-faceted and includes all of these different elements as facets of a full atonement theory.

CAMERON BERTUZZI: Where did you get that idea from? Sort of combining them all together? Was that something you came to? Did you read that?

CAMERON BERTUZZI: It reminds me of Fleming Rutledge in her work on the death and the crucifixion. She mentioned something along the same lines.

DR. CRAIG: Yes, this isn't a new idea. I think for some time theologians have realized that all of these different atonement theories have a contribution to make, and they're based on motifs that are found in the New Testament. They're all affirmed there. So it seems like a multi-faceted model is the only way to go to have a full and adequate biblical atonement theory.

CAMERON BERTUZZI: Where does the ransom theory fit in here? Is that another theory?

DR. CRAIG: That is a version of the Christus Victor theory. Not all Christus Victor theorists hold to the ransom theory, but a few did like the church father Origen. What he held was that we were imprisoned by Satan and therefore a ransom had to be paid to Satan to set us free, much as a kidnapper might be paid a ransom to let his victim go. So these church fathers believed that Satan, because of our sin, had a rightful claim to us and that God therefore paid Christ to Satan as a ransom payment to let us go. But what Satan didn't realize was that this was the Son of God. He was not a mere human being and so he could not be held by Satan. So after having let all his human victims go, Christ then bursts the bonds of Satan because Satan had no claim over him being sinless, and so Satan was thereby tricked, as it were, and robbed of all his victims. There's not very many contemporary theologians who would hold to the ransom theory anymore because it makes the object of Christ's death Satan rather than God, which just seems misconceived. Those who hold to a Christus Victor theory today would generally do so without the element of the ransom being paid to Satan.[2]