#716 Dealing with Spurious Claims about the Firmament

You have claimed in your On Guard podcast that Walton and others are wrong for thinking the firmament is a rock-solid dome. I would like to provide clear proof that you are wrong from ancient sources. In particular I have in mind Jewish and Ancient Near Eastern sources.

Since I cannot resist bringing evidence from elsewhere in the world that further demolishes your view in Levy Bruhl’s Primitive Mentality page 353 we find regarding the Borneo Dayaks:

They . . . consider the earth to be a flat surface, whilst the heavens are a dome, a kind of glass shade which covers the earth, and comes in contact with it at the horizon. They therefore believe that, traveling straight on, always in the same direction, one comes at last, without any metaphor, to touch the sky with one's fingers. Now, as they know that Europeans come from far away over the sea, the supposition that we are nearer heaven comes naturally to them. It seems to them, therefore, clearly impossible that I have not been in the moon, and they wanted to know if in my country we had one or several moons, and if we also had only one sun. It was most amusing to see the signs of incredulity which my negative answers elicited amongst my audience. ... It was with real sorrow that they heard me assert that in Europe the sky was quite as far from the earth as in Borneo.

In terms of Jewish texts the firmament is clearly understood to be solid. See for example 1 Enoch 18 where we find:

“I [Enoch] then surveyed the receptacles of all the winds, perceiving that they contributed to adorn the whole creation, and to preserve the foundation of the earth. I surveyed the stone which supports the corners of the earth. I also beheld the four winds, which bear up the earth, and the firmament of heaven. And I beheld the winds occupying the exalted sky. Arising in the midst of heaven and of earth, and constituting the pillars of heaven. I saw the winds which turn the sky, which cause the orb of the sun and of all the stars to set; and over the earth I saw the winds which support the clouds. I saw the path of the angels. I perceived at the extremity of the earth the firmament of heaven above it. Then I passed on towards the south; Where burnt, both by day and night, six mountains formed of glorious stones; three towards the east, and three towards the south. Those which were towards the east were of a variegated stone; one of which was of margarite, and another of antimony. Those towards the south were of a red stone. The middle one reached to heaven like the throne of God; a throne composed of alabaster, the top of which was of sapphire. I saw, too, a blazing fire hanging over all the mountains. And there I saw a place on the other side of an extended territory, where waters were collected. I likewise beheld terrestrial fountains, deep in the fiery columns of heaven. And in the columns of heaven I beheld fires, which descended without number, but neither on high, nor into the deep. Over these fountains also I perceived a place which had neither the firmament of heaven above it, nor the solid ground underneath it; neither was there water above it, nor anything on wing; but the spot was desolate. And there I beheld seven stars, like great blazing mountains, and like spirits entreating me. Then the angel said, This place, until the consummation of heaven and earth, will be the prison of the stars, and the host of heaven. The stars which roll over fire are those which transgressed the commandment of God before their time arrived; for they came not in their proper season. Therefore was He offended with them, and bound them, until the period of the consummation of their crimes in the secret year.”

This is merely some of several examples I’ve compiled. The list of quotes I have assembled is over 20 pages long and obviously space will not permit listing them all. This small sample should be sufficient to illustrate the utter incorrectness of your view.

I assume that you’re talking about my Defenders podcast, Meir, not my book On Guard. Not only do you neglect to interact with the evidence I presented in the Defenders podcast, however, but your “clear proof” of “the utter incorrectness” of my view is predicated on a naïve handling of ancient texts that vitiates your argument.

With respect to AO 8196 iv 20-22 (cf. KAR 307.303-33) what you fail to understand is that this is a mythological text which needs to be interpreted. Was it supposed to be construed literally or figuratively? Your “smoking gun” approach of merely citing a text exhibits literary naivete by uncritically assuming a literalistic interpretation of such mythological texts. Contrast Horowitz, who says of Mesopotamian mythological texts, “The current evidence simply does not allow us to know, for instance, if ancient readers of Gilgamesh really believed that they too could have visited Utnapištim by sailing across the cosmic sea and ‘the waters of death’ or if a few, many, most, or all ancient readers understood the topographical material in metaphysical or mystical terms.”[1]

Mesopotamian myths touching on cosmic geography are obviously not intended to be taken literally, on pain of incoherence. In the Etana epic, Etana is supposed to fly to the heaven of Anu on the back of an eagle. How he is supposed to get through the solid floors of the lower and middle heavens is not said. In the Adapa myth, Adapa walks up the path to heaven. In Nergal and Ereshkigal, Nantar climbs a stairway to heaven. In the Enuma elish, the metaphor of eastern and western gates with bolts for the astral bodies to pass through (V.9–10), if read literally, presupposes the stars’ moving freely rather than being fixed in a solid dome. In the creation story Marduk filets the body of the dragon goddess Tiamat and, with one half of her body, stretches out the heavens and supports them with her crotch (V.61). But no ancient Babylonian gazing skyward expected to see the desiccated corpse of a dragon overhead, and no traveler ever expected to find the gigantic crotch of Tiamat propping up the heavens.

Moreover, we may infer from ancient Babylonian cosmological texts that mythological descriptions of the heavens as stone surfaces were not taken literally. According to the Babylonian astronomical texts known as the Astrolabes, dating at least to the middle Babylonian period, the fixed stars may be grouped into three “paths” as they move across the sky, each given the name of a deity. The central or equatorial band was called the path of Anu, the northerly band the path of Enlil, and the southerly band the path of Ea. Since according to the mythological texts the stars are inscribed on the surface of the lower heavens, this surface would have to be in constant motion in order to explain the rising and setting of the stars in the sky, a cosmic geography incompatible with the heavens’ being a solid dome resting on the earth at its horizon.

Worse problems still are posed by the motions of the planets, as well as the sun and the moon. For the ancient astrologers observed that the planets do not move in tandem with the fixed stars but wander across the heavens, sometimes standing still and even undergoing retrograde motion. Babylonian astronomers thus differentiated the planets (bibbu, wild sheep), including, in our nomenclature, Mercury, Venus, Mars, Jupiter, and Saturn, from the fixed stars (kakkabu). These planets, along with the sun and the moon, all move in a single band of their own across the sky, but this band cuts across the paths of Anu, Enlil, and Ea due to the tilt of the earth’s axis. As a result, the planets, as well as the sun and the moon, actually transition from the path of one deity to another, appearing at certain seasons of the year in the path of Anu, for example, and at other seasons in the path of Enlil (see figure). 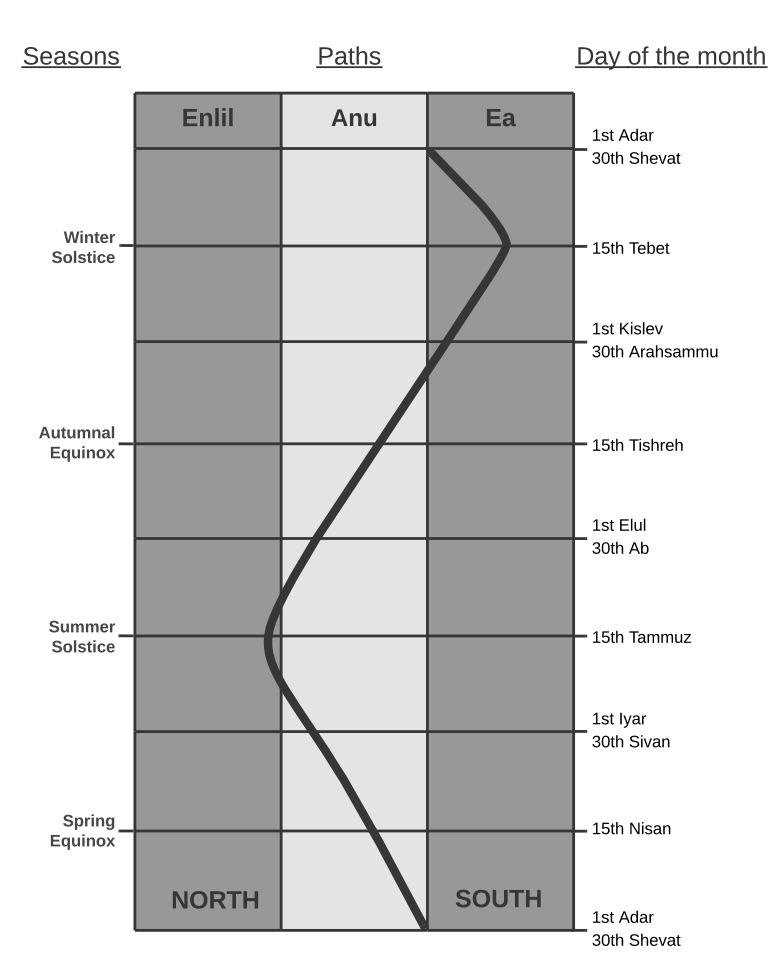 These carefully charted observations on the part of ancient Mesopotamians are decisive against the literalistic interpretation of cosmographic texts that describe the heavens as a solid surface on which the stars are engraved.

So when it comes to the Genesis account of God’s creation of the so-called firmament (rāqîaʿ ), not much needs to be said. With the misinterpretation of Mesopotamian cosmogeography exposed, the main prop for interpreting the rāqîaʿ of Genesis 1 as a literal, solid dome falls away. Genesis 1 tells us virtually nothing about the nature of the rāqîaʿ nor whether the word is used figuratively or literally. The key to the meaning of rāqîaʿ as used in Genesis 1 comes in v. 8: “God called the rāqîaʿ Heaven (šāmāyim).” Šāmāyim is the word for skies. Rāqîaʿ thus denotes the sky or, expressing the notion of breadth, the skies. The ancient Hebrews could not possibly have thought that the sky is a solid dome in which the sun, moon, and stars are embedded, for these heavenly luminaries are observed to move through the sky, and that is why they serve to mark seasons and days and years (Genesis 1.14). Benjamin Smith has probably given the best characterization of the denotation of rāqîaʿ as “the whole sky, all that can be seen above the Earth from the surface.”[2] Much more deserves to be said about this, and interested readers may find further discussion in my In Quest of the Historical Adam (Grand Rapids: Wm. B. Eerdmans, forthcoming).

Back to your question, Meir, your appeal to the views of natives in Borneo (of all places!) as relevant to the interpretation of ancient Mesopotamian (or biblical) texts is astonishing. It exhibits the mentality of 19th century “armchair anthropologists” like J. G. Frazier whose uncritical lumping together of myths from different cultures and times is universally rejected today by folklorists.[3]

Again, your merely citing I Enoch 18 without any attempt to understand it repeats the same error you made concerning Mesopotamian texts. I Enoch is late apocalyptic literature, Meir, and relates the visions of Enoch! Apocalyptic visions are filled with figurative imagery, such as this very citation so clearly exhibits, which no one thinks was intended to be taken literally. If you think Jewish apocalyptic literature was supposed to be taken literally, then good luck at convincing scholars!

I’d hate to see the remainder of your “list of quotes” if it’s just more of the same, Meir. A list of quotations is worthless without interpretation. You’ve obviously been influenced by the free-thought subculture that is mired in the 19th century and has little grasp of modern scholarship. I’d encourage you to begin to think critically about what you’ve been told, to approach texts with sensitivity to literary genre, and to try to understand, rather than merely quote, ancient texts.

[3] See this characterization by Alan Dundes in the introduction to Sacred Narrative: Readings in the Theory of Myth, ed. Alan Dundes (Berkeley: University of California Press, 1984), 3. Similarly, the work of Levy-Bruhl postulating a development from ancient man’s primitive mentality to contemporary man’s modern mentality is virtually universally rejected today.