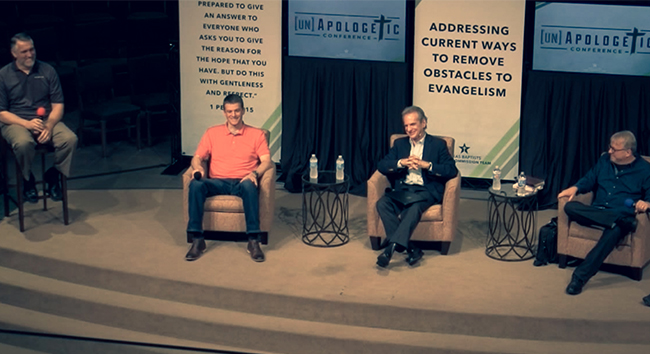 Dr. Craig joins a panel and answers questions on Free Will and Molinism.

KEVIN HARRIS: It’s Reasonable Faith with Dr. William Lane Craig. I’m Kevin Harris. I don’t know if you’ve had a chance to go to an apologetics conference, but they can be very informative and a lot of fun as we are going to hear today as we continue this series of a panel discussion with Dr. Craig as he joined Mike Licona, Mark Mittelberg and Leighton Flowers at an apologetics conference[1] where attendees asked them questions. Here we go!

QUESTION: This question is directed at Dr. Craig. I’m actually glad that you explained subjunctive conditions because my question is about Molinism. The only proof verse that I am familiar for that conditional is Genesis 18 where Abraham is asking God if there is a righteous person in the city will he spare them? God’s response is depending . . . how do I question my question? . . . God answers knowing what he will do. But I'm not familiar with other verses where he knows what other people will do given their free will. So are there other proof verses for God knowing what other people would do given a different situation?

DR. CRAIG: One of the most famous passages is in – I can't give you the exact citation, I think it's 2 Samuel[2] – it's the story of David who is holed up in the city of Keilah and he's being pursued by Saul. David gets a divining device called an ephod and asks the ephod, If I stay at Keilah, will Saul come down and attack the city? And the ephod says, Yes, Saul will come down. And then David asks the ephod, If Saul comes down and attacks the city, will the men of Keilah turned me over to Saul? And the divining device says, Yes, they will turn you over, whereupon David flees Keilah with his men and as a result Saul does not come down and therefore the men of Keilah don't turn David over to Saul. So what the ephod was giving David was not knowledge of the future (Saul didn't come down; they didn't turn him over it); it was giving him knowledge of these subjunctive conditionals – if you were to remain in Keilah, Saul would come down, and if Saul were to come down, the men of Keilah would deliver you over to him. And knowing those truths, then David flees the situation so that none of it comes to pass. That's a great example in Scripture of this kind of divine knowledge of these subjunctive conditionals.

QUESTION: OK, I have another question to you. I've noticed that you've given an answer that kind of contradicts what John Lennox says given if Jesus's bones were to be discovered. Lawrence Krauss asked John Lennox what it would take for him to disbelieve or not believe in Christianity, and Lennox responded with, If they found Jesus's bones. But I've heard you say in a video that based on the shifting sands of evidence and the self-authenticating experience that you would still believe. But I feel that's also the same case that a Muslim can make. So how can Christians make their argument better than that of a Muslim to an atheist?

MARK MITTELBERG: I told you those last questions are always dangerous.

DR. CRAIG: The question that you posed is usually a gotcha question that's intended to embarrass rather than to ask a real point. They want to get you to admit that you would still believe in the resurrection of Jesus even if they found the bones of Jesus and found his remains and – ha-ha – look at how irrational he is. This is nothing but a gotcha question. But the people who pose these gotcha questions are usually so inept that they misstate the question so that you can easily elude it. What you're thinking of is one such answer that I gave where they did not ask correctly “If they found the bones of Jesus, would you still believe in the resurrection?” Instead they say something like, “If archaeologists were to find some bones and they thought that these were the bones of Jesus, would you still believe in the resurrection?” I said, “Yes, I would sooner believe in the resurrection then that they had correctly identified the bones.” But, of course, if they were the bones of Jesus, it would follow then that Jesus is not risen from the dead. That's trivial. That's tautologous. So that's absolutely correct. The question would be: Would we ever be justified in thinking that we have discovered the bones of Jesus? And I think that's highly, highly improbable that one would ever be in such a situation. Now, how does this make you any different than the Muslim or the Mormon who has a mystical burning in the bosom or something of that sort? I don't think that those folks are irrational in appealing to such experience. I think that you are perfectly justified in accepting your religious experience as a properly basic belief unless and until you have some kind of a defeater for thinking that that experience is delusory. And I think in the case of Mormonism and Islam there are such defeaters. There are very good defeaters for thinking that Islam is not true and that Mormonism is a hoax. But I don't think that there are comparable defeaters for Christianity, and so I think that I am perfectly justified in believing in Christianity on the basis of the inner witness of the Holy Spirit in a properly basic way in the absence of any defeater of that experience. That is different from the case of the Muslim or the Mormon.

QUESTION: Does Mike have anything to say about that?

MIKE LICONA: Bill said it. I believe it. That settles it. [laughter]