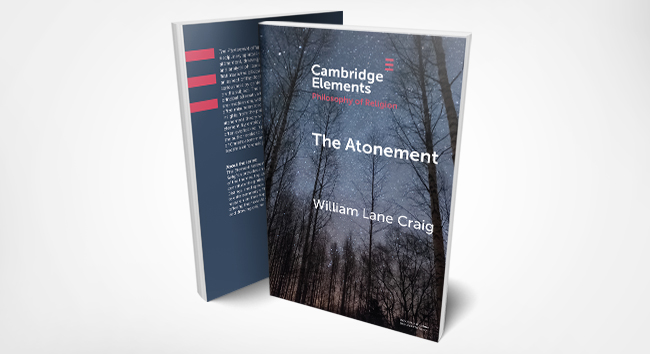 Dr. Craig has compiled his extensive research on the Atonement into a new book

KEVIN HARRIS: Dr. Craig – your newest book: The Atonement. That is a beautiful cover.

DR. CRAIG: This was chosen by Cambridge University Press for the book. I had wanted something a little more literal like a crucifixion painting, but I rather like this cover. It portrays the dark silhouettes of trees against the starry sky at night, and one of the metaphors in the New Testament for the cross of Christ is the tree – he himself bore our sins in his body on the tree, the Bible says. So it is not inappropriate to have this cover featuring these trees reaching to the sky.

KEVIN HARRIS: Talk about this book and how it's broken down and what you cover.

DR. CRAIG: The book is divided into three parts.

The first part is a review of the biblical material, both Old Testament and New Testament, with respect to the doctrine of the atonement. This is, I think, an absolutely essential part of the book because when you read the work of contemporary Christian philosophers on the atonement they are, in general, biblically uninformed. They don't have the tools to work with the Hebrew and Greek text or even the English language text, it seems, of the Bible. So their theories of the atonement that they develop are very typically based upon the way in which reconciliation takes place between human people. For example, two friends have a falling-out because one has offended the other – how is reconciliation achieved between these two people? They take that as a model for how our reconciliation with God is achieved. The danger here is that you develop a theory of the atonement which is based upon human relationships which are very disanalogous to divine-human relationships in various ways and which, however congenial they might appear, just have nothing to do with the doctrine of the atonement as taught in the Bible. It is very important to have this biblical material laid out because one of the criteria by which a theory of the atonement is assessed is: Is it biblical? Does it comport with the biblical data? A second criterion will be its philosophical coherence, but we can't skip that first step. So the first step is laying out the biblical data concerning atonement.

The second part of the book is a brief survey of the principal pre-modern theories of the atonement – things like the Christus Victor model, satisfaction model, moral influence model, penal substitutionary model. What I found in my study of these is that these traditional theories of the atonement are greatly misrepresented in the literature today. They are pilloried. They are caricatured. They are cruelly misrepresented. It's really important if we're to understand these traditional theories that we let the authors speak for themselves. Go back and read the primary sources like Anselm and Gregory of Nyssa, Origen, and the Reformers and understand these theories properly.

KEVIN HARRIS: The book just came out – it hasn't been out very long – and I looked around to see if I could get some reaction (maybe some criticisms or anything like that) and there's not really any yet. Next time we do some podcasts, we'll see. But I did get one who asked about you and J. P. Moreland's book (Philosophical Foundations) where you talk about the atonement there.

KEVIN HARRIS: This blogger[1] agrees with everything, but he says,

DR. CRAIG: Right! I had to smile when I read this because he's absolutely right, and the reason for this is because of the severe word limits in the book. All I could do was contribute one chapter, and initially I tried to condense all of the material down to a single chapter. I just couldn't do it. It was impossible. So what I in the end did is I left out the biblical material, I left out the historical discussion of the traditional models of the atonement, and only included part three in the Foundations book which is the philosophical reflections because after all the book is on philosophical foundations for a Christian worldview. So he's absolutely right that the reasons for thinking that penal substitution is going to be a central facet of any biblically adequate atonement theory is not to be found in the Foundations chapter. It is to be found in this book, The Atonement, published by Cambridge University Press. This will have the justification for those assumptions that he asks for.

KEVIN HARRIS: OK. Did you want to look at what he said? He says,

Finally, I am left wondering, what we should do with biblical passages which mention that we have died with Christ. If punishment for sin is death (2 Cor 5 & Gal. 2), then it seems like in our “dying” with Christ we have experienced some sort of punishment. Are these passages figurative? Or should we take them in some sort of realist fashion? I’m inclined to say that it is the latter. And if in fact, we have died with Christ, experiencing the punishment for sin, would we still be able to call such an account [penal substitutionary atonement]? I’m not sure… That’s just some food for thought.

DR. CRAIG: This author is so insightful. One of the elements in the book (again, that's not included in the chapter) is a discussion of Christ as our representative before God. I distinguish between being a simple representative and being a simple substitute. For example, a pinch-hitter in baseball is a substitute for a player. He bats in place of the player, but he in no way represents the player. That's why the performance of the pinch-hitter doesn't affect the batting average of the person he replaces in the lineup. He's just a substitute. By contrast, a representative is someone who acts on behalf of someone else. This player in baseball probably has an agent who represents him in negotiations with the team for salary and other benefits. The agent isn't a substitute for the player, but he is a spokesman on behalf of the player. Those would be examples of simple substitution and simple representation.

KEVIN HARRIS: I've been looking for a good sports analogy for all this! I like those.

DR. CRAIG: What we have in Christ is a combination of substitution and representation where Christ is not merely our substitute but also our representative. This is substitutional representation, or representative substitution if you prefer. A great example of this would be someone who acts as your proxy at a stockholders’ meeting. If you own stock, you'll get a proxy form in the mail saying that there's a stockholders’ meeting coming up (which you'll probably not attend) but you can sign this form authorizing someone to act as your proxy at the meeting who will vote in your place. This person is both a substitute and a representative – he attends the meeting instead of you, but he doesn't vote instead of you, he votes for you. You voted the meeting via your proxy. I think that in Christ he is our proxy before God. He doesn't simply substitute for us, but he represents us before God. Therefore when my proxy is punished, I am punished. I think the author here is absolutely correct – I am punished via proxy. So it is consistent with penal substitution, but it's a very special kind of substitution. Theologians call this inclusionary substitution, as opposed to exclusionary substitution. I am included in Christ and in his death and punishment because he is my proxy before God.

KEVIN HARRIS: I want to encourage everyone to get this book on the atonement because . . . well, there's two main reasons why we need to know the biblically correct view of the atonement that's philosophically sound, just so that we can try to grasp the love of God and the profundity and the grace of the atonement. That being number one. But also because in today's culture it's often viewed as unjust, even by theologians.

DR. CRAIG:  Oh, yes. The doctrine is under great attack today even by theologians, and not just secularists. I think that, oddly enough, this is a vital component of Christian apologetics as well as Christian theology. It is important that average Christian people understand and be able to defend this doctrine which is so fascinating and exciting in its own right. To help people do that, what we're developing is a study guide to go with the book. The book is only a hundred pages long, easily digestible by laypeople in a group study. We'll have a study guide which will accompany it that will ask pointed questions to make sure you've understood the book. Then we'll provide incentives for discussion among the group like what theory of the atonement does your pastor hold? What sermons have you heard on the subject of the atonement? I think that will be very revealing for many people as they discuss these issues and read the book.

KEVIN HARRIS: Absolutely. As we wrap up today, a while back you said that this could possibly be your most important work. Do you still feel that way?