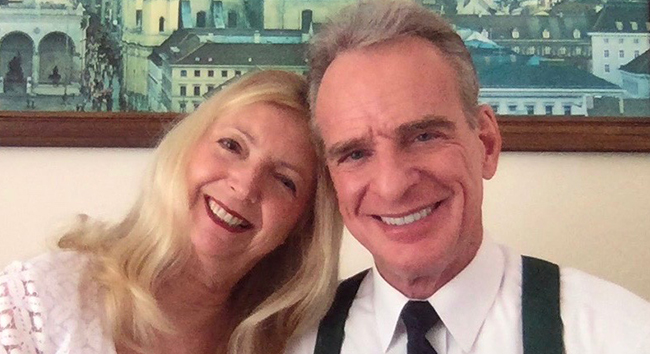 Dr. Craig gives some history behind the amazing support of his wife, Jan. In a rare moment, he and Kevin become very emotional at the end of the podcast.

KEVIN HARRIS: Dr. Craig, let’s talk about your “secret weapon.” This is a blog from Wintery Knight who just really pays homage to Jan, your wife, and says, “William Lane Craig’s secret weapon is his amazing wife, Jan.”[1] I love this picture that he includes on the blog because so many of us, including me – that’s what we think of when we think about you and Jan. A beautiful medieval picture of you as a knight going off to battle and being encouraged by a lady. She even has blonde hair like Jan does! [laughter]

DR. CRAIG: I love this painting, as well. And I feel like that knight. I really do. I feel like I go forth into battle and that she sends me just like this lady does her knight. It's a beautiful portrayal.

KEVIN HARRIS: It says that it turns out that you owe a lot of your success to Jan. You gave a talk – a chapel address – to Biola University students and you describe what happened after you finished your bachelor's degree at Wheaton. If you would like you can recount here what you told them because he quotes you and copied down what you said right as you joined the staff of Campus Crusade.

DR. CRAIG: Jan and I were at Trinity. I had begun my classes in the fall semester. After a few weeks I came in and said, Well, I don't know what to do now. I have done all the work for all of my classes. What should I do? And she said she just couldn't believe it. She said, What is going on with this guy? I can't just have him sitting around doing nothing! So she got the catalog for the Divinity School out and all of the course offerings and so forth and figured out how I could do two Master's degrees during the time that it would take to do one. She said all you've got to do is take overloads each semester, go to all of the summer school classes full-time, and then do some extra things on the side, and you will have two Masters degrees in the time that it takes to do one. It was at that point that I realized that this young woman to whom I’ve been married for only about a year and a half was going to be my cheerleader and was going to be just a tremendous source of encouragement and inspiration. So that was what we did. In the two years at Trinity I earned Masters degrees in both philosophy of religion and in church history and the history of Christian thought.

KEVIN HARRIS: She figured all that out without the Internet, if you can imagine.

DR. CRAIG: Yes, that’s right! It was just sitting at the supper table with all of these schedules and catalogs out in front of her.

KEVIN HARRIS: You said, Are you sure you really want to make the commitment it takes to do this kind of thing? And she said go for it. She cheered you on. In an article on the website, you talk about how Jan encouraged you to do your first PhD.

DR. CRAIG: Yes. It was near the end of our time at Trinity. I was about to graduate, and we didn't know what we were going to do after graduation. We had no clear guidance from the Lord or vision of what we ought to do upon graduation. We were sitting at the supper table one night talking about it, and she says to me, Well, honey, if money were no object, what would you really like to do next? I said, Well, if money were no object, I guess I'd like to go to England and do a doctorate under John Hick. And she said, Who's he? I said, He's this famous British philosopher who's written on arguments for the existence of God, and if I could study under him I could write a doctoral dissertation on the cosmological argument for God's existence. The next day she came back to me and said, I went to the library, and I found out that John Hick is at the University of Birmingham in England, and here's his address. Why don't you write to him and ask him if you can come and do a doctorate under him?

KEVIN HARRIS: Once again, without the Internet.

DR. CRAIG: Yes. So we wrote a letter to Professor Hick, and to my delight and surprise he wrote back and said, Yes, I'd be very pleased if you would come and do a doctorate under me writing on the cosmological argument for the existence of God. So it was an open door. All we had to do was come up with the money. And the way in which the Lord supplied the money to do that is another story of God's marvelous provision. We received money to enable us to do the entire study in England without going into one cent of debt. It was a great time out of which flowed three books and a version of the cosmological argument that I have used on university campuses and evangelism ever since.

KEVIN HARRIS: That preemptive strike that she said – If money were no object, what would you do? – did she know that you would say, We don't have the money? She just knew you were going to say that?

DR. CRAIG: I've never asked her about that. I guess she must have thought, What is your vision? What would you like to do? And if that is your vision then we'll trust God to supply the means to reach the goal. And that's exactly what happened. We did not let money be a determining factor. We thought of what we felt we wanted to do – what was our vision –  and then we trusted God to bring in the money.

KEVIN HARRIS: OK, So you went and began your doctoral studies in Birmingham. Near the end you're sitting in your little house there in Birmingham at the table, and she says, Honey, if money were no object, what would you like to do next?

DR. CRAIG: Exactly. We didn't know what I was going to do upon graduation from Birmingham either, and she asked me that same question. I laughed because I remembered that it was the question that God had used to guide us to go to England.

KEVIN HARRIS: Were you thinking about teaching?

DR. CRAIG: Yes. Thinking about getting a teaching position in the States somewhere. But I laughed and I said, If money were no object I guess what I'd really like to do is go to Germany and study under Wolfhart Pannenberg. And she said, Who's he? And I said, He's this famous German theologian who's defended the resurrection of Jesus historically, and if I could work under him I could write a thesis on the historical credibility of the resurrection of Jesus. Well, we kind of forgot about it – at least I did – until a couple days later she confronted me at dinner time and told me that when I said that it had lit a fire within her, and she had gone to the university library the next day unbeknownst to me and began to research on grants-in-aid to study at German universities. She came across this thing called the Alexander von Humboldt-Stiftung – the Alexander von Humboldt Foundation. This is a foundation that brings foreign scientists and scholars in other fields to Germany to do research in German laboratories and universities. Most of these men are scientists – physicists, molecular biologists, chemists, and so forth – but it said it was open to any field so we applied in the field of theology and proposed as my research project an investigation of the historical credibility of the resurrection of Jesus. Then we began to pray. Sometimes I could believe God for this, other times I would think of these 24 German academics sitting around this long table in Bonn weighing these various research proposals and coming across this one on the historicity of Jesus’ resurrection, and my heart would just sink. Well, to make a long story short, what happened is again marvelously we were granted a fellowship from the Alexander von Humboldt-Stiftung to do this research under Pannenberg, and then it was renewed for a second year. So for two years the German government paid me to study the historical evidence for the resurrection of Jesus. Out of that study again came three books and an argument for the historicity of the resurrection that I still use all the time on university campuses. Once again it was Jan's prompting and help that propelled us on this remarkable adventure.

KEVIN HARRIS: You've pointed out before that she's a person who is tremendously resourceful and talented. She's energetic. She could have pursued her own career.

DR. CRAIG: Very much so. There would be any number of areas where she could have been a very successful career woman, but she subordinated all of that to helping me in my ministry. Her goal is to make me as effective as I can possibly be. The Lord has really used her in my life in that capacity.

KEVIN HARRIS: I can say that she still has her interests in her things.

KEVIN HARRIS: It’s a choice. It happens to be this choice that she wanted to take on this supporting role.

DR. CRAIG: Yes, very much so. She freely took on this supporting role rather than seek the limelight herself. Very, very early in our marriage I remarked to her one day, I feel like I can do anything if there's just one person that believes in me. She later told me that when I said that she thought to herself, I want to be that one person.

KEVIN HARRIS: And she certainly has been.