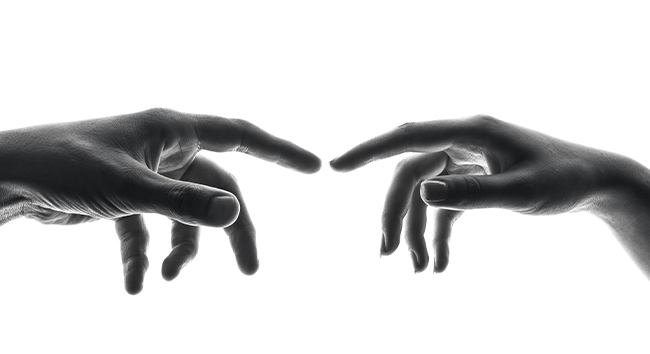 Dr. Craig is enthusiastic about an article from a former atheist who came to Christ on the strength of arguments for God's existence.

You are going to enjoy today’s podcast as we look at a former atheist who came to Christ.

Boy, Dr. Craig, this is an article that I have enjoyed reading, and I think you have, too, from Michael Egnor, a former atheist (now a Christian), writing on the Faith and Science blog. He takes Jerry Coyne and others to task on our divinity sense organs (the name of the article: “Jerry Coyne on Our ‘Divinity Sense Organs’”[1]). When I first read that title, I am thinking, “OK, is he talking about Alvin Plantinga?”

DR. CRAIG: That’s what I thought, too! The sensus divinitatis, is what Plantinga talks about.

In my own conversion from atheism to Christianity, I was helped immensely by some unlikely evangelists: atheists.

I had been raised in a culture in which atheism seemed the “smart” way to think about metaphysics. Atheists were the scientists and the philosophers. Christians were the televangelists and the “science-deniers.”

Bill, he puts you in some pretty good company!

The arguments against God’s existence were weak, vague, and dubious. Richard Dawkins and his coterie of Darwinists and materialists recycled sophomoric tropes (“Who made God?!,” “Why don’t we see God in our telescopes?”) and the like. Try as I might (and I really tried, and still try), I couldn’t find a credible argument against God’s existence, and I found many very strong arguments for His existence.

DR. CRAIG: This article is so well-written and so well-crafted. I love the way he characterizes the arguments for God's existence with three adjectives: strong, clear, and convincing. Then the three adjectives to describe the atheistic arguments: weak, vague, and dubious – the exact opposites. And I think that that's an accurate characterization.

A shimmering example of atheist idiocy (there is no other word for it) is Jerry Coyne’s recent argument, at Why Evolution Is True, against God’s existence in his post on David Attenborough’s agnosticism. Attenborough, who is a Darwinist producer of nature films (quite good films I must say, despite the Darwinist taint), was interviewed about his views on God.

To Coyne’s chagrin, Attenborough declares that he is agnostic about God’s existence. Attenborough raises common objections to theism (e.g., the problem of evil), but he invokes a rather nice metaphor about a termite mound. He points out that termites, blind and busily working away in a mound, are unaware of human observers. Their unawareness is not evidence that an observer doesn’t exist — they lack the sense organs to perceive the observer. Attenborough says that is why he is agnostic — he doesn’t sense that God exists, but perhaps that is because he lacks the capacity to know God.

What do you make of that?

DR. CRAIG: It reminds me of the hiddenness of God issue that we’ve talked about on other podcasts. Attenborough seems to have an attitude of humility about this. He doesn’t see the evidence for God’s existence, but he says, Maybe that is due to some incapacity in me rather than a failure of the evidence. I think that is a very humble attitude.

I do sometimes feel that maybe I’m lacking in some sense organ, and I don’t know whether there’s anybody else involved in all this sort of thing. And it’s a very confident thing, saying that you’re absolutely sure that there’s nothing in this world that I don’t have the sense organs to appreciate. That would be my position.

DR. CRAIG: I take it he is saying there that it would be very, very confident for you to say that there is nothing in the world that I don’t have the appropriate sense organs for, or in other words, that I have the appropriate sense organs to sense everything in the world. We know that is false. I can’t see ultraviolet light. I can’t hear ultrasonic sounds. There are all sorts of things that exist in reality that you and I cannot perceive with our sense organs.

KEVIN HARRIS: Boy, that gets into epistemology and stuff like that – doesn’t it? – as far as propositions, the laws of logic, and things like that. You wouldn't have a sense organ that would reach out and somehow detect those.

DR. CRAIG: That's a very good point. I was thinking of concrete objects, but your question is well-posed. What about mathematical knowledge? We surely know things about the natural numbers but we don't know them through some sort of sense organ.

KEVIN HARRIS: I don't mean to take us that far afield.

DR. CRAIG: No, but you’re illustrating the fact that you can't be confident that you have the appropriate sense organs for sensing everything that there is; in fact, we know that we don't.

Coyne hops on this:

[O]f course, if a god wanted to make himself known to humans, he would have given them the sense organs to detect divinity.

My goodness. In this one assertion, Coyne (culpably) and Attenborough (more innocently) betray a breathtaking ignorance.

DR. CRAIG: I think this is just a brilliant point. In saying that God would create us with a sense organ that would detect his existence, Coyne seems to be presupposing that God is a “sensible” object which is the exact opposite of what God is. So I think that Michael Egnor is absolutely correct in saying that this shows an utter misunderstanding of the nature of God.

And, contra Coyne and Attenborough, God did endow us with an organ by which we may know Him. He endowed us with reason. Alone among animals, human beings have the power of abstract thought — to contemplate ideas separated from concrete particular (sensible) objects. We have intellect, by which we can understand immaterial knowledge and will by which we act on our abstract knowledge.

DR. CRAIG: Again, that is so well-written, isn’t it? We have reason as a gift from God by which we can apprehend his existence. I think that's absolutely correct. This would also help to explain what we were talking about a moment ago, namely mathematical knowledge as well. I would only add to this the point that you alluded to with respect to Alvin Plantinga, and that is God may have so constructed us cognitively that we have the ability to apprehend the testimony of the Holy Spirit in such a way that God can communicate to us his truths in a sort of properly basic way grounded in the witness of the Spirit. And Plantinga would see this as part of the deliverances of reason. This is not something that's distinct from reason, but rather the deliverances that come to us through the witness of the Holy Spirit are part of reason’s deliverances. So right in line with what Egnor is saying.

KEVIN HARRIS: I thought it was interesting that Michael called this – our reason – an “organ.” He said, “God did endow us with an organ by which we may know Him.” But when you think about what an organ is, it's something that is organized or part of an organization. That did get me thinking: is our reason in that sense an “organ?”

DR. CRAIG:  I think he is just using the word metaphorically here.

KEVIN HARRIS: OK, I guess so.

DR. CRAIG: I think he could have easily said he's given us a faculty by which we know God.

Reason is our divine “sense organ.” It is perfectly adapted to its task — it allows us to know and love our Creator. In this sense we are created in His image: we have the capacity to know immaterial reality and to act on our knowledge.

DR. CRAIG: My study of the doctrine of the image of God in Genesis 1 is right in line with what he is saying here. I think that the fact that we are endowed with reason, self-consciousness, freedom of will is what it means to be in the image of God.

KEVIN HARRIS: He is saying in this next paragraph as a former atheist,

Atheists ask where is our “divine sense organ?”, when the very capacity by which they ask the question — their capacity for reason — is the “sense organ” they seek. This utter atheist idiocy helped lead me to God. What I found, when I looked at the arguments for and against His existence, is that the arguments against His existence were vapid nonsense.

In this sense, I owe Coyne and Attenborough a debt of sorts. Through arguments of this kind — “Where is our divine sense organ?” — the irrationality of atheism, and the rationality of belief in God, is made even more clear.

One hopes that others are not misled by this manifest atheist nonsense, and that even Coyne and Attenborough may come in time to understand (not “sense”) the existence of the Source of their capacity for reason.

Talk about that last part – “come to understand (not ‘sense’).”

DR. CRAIG: Because it is not literally a sense organ, it is our reason that helps us to understand and apprehend God’s existence. I think this is a beautiful blog. It is so well-written. The points are succinctly stated. It is very clear. I just wish that some of these people on Facebook who post these snide atheistic comments portraying themselves as so bright and enlightened compared to ignorant Christians would read an article like this. I think it would do them a world of good.[2]