The Case For Christ Movie 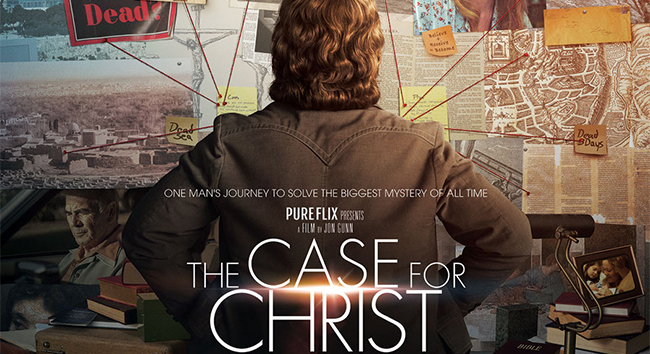 Dr. Craig is portrayed in the movie based on The Case for Christ by Lee Stobel. He discusses the film and the state of ‘faith-based’ films.

Transcript The Case for Christ Movie

KEVIN HARRIS: Well, Bill, they didn’t get Brad Pitt or George Clooney to portray you in the movie, but they got a great actor named Russ Blackwell who has been in a movie with Brad Pitt. Russ Blackwell portrayed you in the new movie The Case for Christ. I just want to get your impressions on this whole process: the fact that this book has become a movie, your impressions of the movie, the consultation that was requested of you for the making of the movie, and so on.

DR. CRAIG: I was pleased that they got Russ Blackwell to play my part. He sported the dark beard and hair that I had back in the 70s and 80s. I thought that the portrayal was very flattering so I was pleased with that! [laughter] Lee Strobel did consult me in advance about the script – my scene that is to say. I was so glad that he did so because it was very evident that the script writer had a very poor grasp of the evidence for the resurrection and what were the important points to emphasize. I had to really work with him in re-writing the supposed interview conducted with me by Lee Strobel to make sure it focused on the right points. The scriptwriter wanted to emphasize the guard at the tomb, the old “who stole the body” idea and how could they have gotten past the guard. I had to explain to them this just isn’t an issue in contemporary discussions of the empty tomb and to focus the interview on what I perceive to be the correct issues. Having said that, most of the script apparently wound up on the cutting room floor because it was in the end much, much shorter than the script that I had approved and worked on with the scriptwriter for that scene. But that is normal. That is to be expected. They always wind up cutting most of what they’ve filmed. The end result was, I thought, pretty decent.

KEVIN HARRIS: A lot goes into movie-making. You’ve got to know how to make it compelling. What to put in. What to leave out. It is not always chronologically accurate in order to maybe tell the story and some things like that.

DR. CRAIG: I think that is worth emphasizing because I’ve had a number of people come to me and say, “Tell me! What was it like having Lee Strobel come to you and interview you during this time?” What they don’t understand is that this is all a fictional artistic recreation. Lee didn’t go out and interview these people prior to becoming a Christian. When he wrote the book The Case for Christ he says in the preface to that book, I want to recreate the journey to Christ by going and interviewing scholars that will speak to these issues. So he came to our home in Atlanta. This was long after he had become a Christian. This was after I had participated in the big debate at Willow Creek that he and Mark Middleberg put on with Frank Zindler. So there was never prior to his becoming a Christian an interview between Lee and me, much less one that took place in Jerusalem as it does in the movie. This is all part of the artistic recreation. So although it is based on a true story, viewers should be careful not to think that this all literally happened.

KEVIN HARRIS: He was a rising star journalist with the Chicago Tribune. When he created the book, when he wrote the book, he wanted to apply his journalism skills to this process which he said he employed naturally when he was on this quest. In fact, that is how all of these books came about. It has been a very influential book.

DR. CRAIG: Oh my goodness, yes. Just millions of copies. I would be interested in asking Lee sometime, “What did you actually read during those days when you were searching for the truth about Christ and the resurrection? Given that you didn’t actually interview me or Gary Habermas or these other people, whom did you read or talk to?” I don’t know the answer to that but I am curious.

KEVIN HARRIS: There was a review in Christianity Today.[1] It says, “In The Case for Christ, experience not evidence is the real clincher.” When we kind of looked over this article, this review from Christianity Today gave the movie a pretty good review.

KEVIN HARRIS: It just said that the part where all the apologetics came in and the interviews kind of bogged it down. I guess they wanted more of an emotional movie.[2]

DR. CRAIG: Yeah. The reviewer makes a very interesting point. What is compelling about this movie is not its apologetics content. It is the struggle of Lee Strobel, the principal character, to save his marriage because his wife has converted to Christianity and this is tearing their relationship apart. So the viewer wants to see if he will be able to somehow get it together and save his marriage. In that respect, The Case for Christ is very much like the movie God’s Not Dead. What really drives that movie is also the relational, emotional parts of the movie such as the young man’s relationship with his girlfriend who won’t support him because of his stand for Christ. Again the apologetics content of that movie is almost trivial compared to the relational aspects. For that reason I thought God’s Not Dead is really a sort of chick-flick. It is all about relationships, not really about apologetics. The Case for Christ, I think, is not like that. But I do agree with the reviewer that what really does drive the film would be this more experiential, relational part and not the interviews that appear periodically throughout the movie. I thought what was especially compelling about the film was this subplot that goes through the film of that black young man who is unjustly accused of a crime. Lee, in the film, has tried and convicted him already in his newspaper column because Lee wasn’t willing to really follow the evidence where it led. This served as a kind of case in point symbolizing his attitude toward Christianity and the resurrection. Just as his did not give this young black man an open-minded chance to inquire into the evidence, he wasn’t giving Christianity the sort of open-minded opportunity to exonerate itself by the evidence. So I thought that kind of subplot, again, was one of the most compelling parts of the movie.

The question then, it seems to me, is how can a filmmaker work in apologetics content without it being lame or instructional or bogging down the movie? To read this Christianity Today reviewer, you would think that what the scriptwriter needed to do was simply eliminate all the apologetics content from the film. Just cut it and just have it be about Lee Strobel’s desire to save his marriage and about how he eventually comes to Christ and his relationship with Leslie is preserved. But to do that without explaining any of the arguments or evidence that led him to change his mind would seem very strange to me. So how do you put it together in the most compelling way? I think that is a question that Christian scriptwriters still need to work out.

KEVIN HARRIS: Absolutely. And how the director would portray this in a compelling way. Would he use flashbacks? Would he have some kind of a historic reenactment going on in the background as to what it might have looked like? Just anything. That is going to be up to a good director to make a good product. Lee apparently really wanted to get in the apologetics here to encourage believers – you need to know this stuff. And non-believers, you need to know this stuff.

DR. CRAIG: That is absolutely right. Lee has the heart of an evangelist. He wants non-believers to find the same life-changing truth that he himself found and has turned his life and Leslie’s life upside-down. To make a film about his life that didn’t include any of this sort of content, I am sure would just be unacceptable to Lee because he does want it to be a tool of persuasion, to challenge unbelievers, and, as you say, to strengthen believers in giving a reason for the hope that is in them.[3]

KEVIN HARRIS: Speaking of unbelievers, this reviewer for Christianity Today said on page 3,

God’s Not Dead rightly received criticism for its simplistic portrayal of non-Christians, suggesting that Christianity’s empirical truth is so obvious that the only explanation for unbelief must be emotional dysfunction or willful ignorance. The Case for Christ avoids this pitfall by aligning the audience’s perspective and sympathy with an atheist protagonist: Strobel’s skepticism is complex, and is portrayed as such, at least to begin with.

He did say that is the drawback of a couple of other apologetics-based movies, which I am glad is happening. God’s Not Dead, God’s Not Dead 2.

DR. CRAIG: Absolutely. This is progress that is being made. We are, as Christians, learning the art of good filmmaking.

KEVIN HARRIS: It makes for a good movie that this professor would actually have some emotional baggage that comes out. I mean, OK, that is the movie. But I did notice on social media a lot of criticism of that – that it is all going to be emotional.

DR. CRAIG: I was glad that this reviewer found The Case for Christ to present a more realistic and compelling character. Maybe that is because it is based on Lee’s actual struggle.

KEVIN HARRIS: The reviewer in Christianity Today makes another good nod in this direction. He says,

It’s a relief, then, to find that Pure Flix’s The Case for Christ, released in theaters last week, makes an effort to shed the constraints of the “faith-based film” in favor of a more well-rounded vision.

That brings up a side issue that we will touch on briefly. Fox News reported in an article[4] that a lot of Christian filmmakers are saying that the faith-based film label needs to go. It is too problematic. Unfortunately, the label kind of sticks. It sticks for The Case for Christ. It says,

Just labeling something as a faith-based film can turn an audience off or cause you to prejudge it.

DR. CRAIG: What faith needs to be portrayed as is, as you say, a natural part of people’s lives, and these sorts of struggles with the big questions are common to humanity, especially to young people as they ask about the meaning of life and the meaning of existence and so forth. So it needs to be portrayed naturally, realistically, and not be preachy. That is the challenge, I think, in doing Christian films. How do you avoid coming across as preachy? I don’t think that God’s Not Dead succeeded in avoiding that pitfall, but it seems to me that The Case for Christ does a much better job in that regard.[5]